Randhir Kapoor - Made his Debute asDirector and Hero 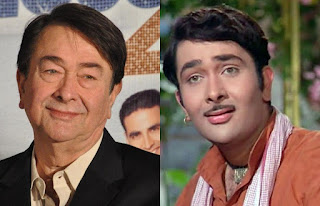 Randhir Kapoor(15th Feb 1947) the eldest son of Raj Kapoor made his acting and direction debut in a leading role in the family drama Kal Aaj Aur Kal (1971). He appeared as a child artist in Shree 420 (1955) and Do Ustad (1959). After his debut, he acted in three consecutive hit films, all released in 1972: Jeet, Rampur Ka Lakshman, and Jawani Diwani.
In 1975, he directed and starred alongside his father again in the critically acclaimed Dharam Karam, which was a box office disappointment.  From 1976 to 1981, his multi-star films such as Chacha Bhatija (1977), Kasme Vaade (1978) were successful
.Randhir married actress Babita, the daughter of actor Hari Shivdasani, on 6 November 1971 when he was just 24 after co-starring with her in Kal Aaj Aur Kal, as the couple fell in love during the shooting of this film. Their two daughters, Karisma Kapoor, born in June 1974, and Kareena Kapoor, born in September 1980, are Indian film actresses.
In 1991, he directed and produced the blockbuster Henna (1991), that starred his younger brother, Rishi Kapoor and Pakistani actress Zeba Bakhtiar. The film had started production in 1988 with his father Raj Kapoor directing, but after his death, Randhir took over as director of the film. Henna resulted in a trip to Pakistan, where he was treated royally by then-prime minister Nawaz Sharif, a fan of his father Raj and his uncle Shammi Kapoor.
In 1999, he made his comeback in the film Mother, alongside Rekha, Jeetendra and Rakesh Roshan. After another break, he appeared in the film Armaan (2003), in a supporting role as Preity Zinta's father.