The First English Song and Kiss in a Hindi Film 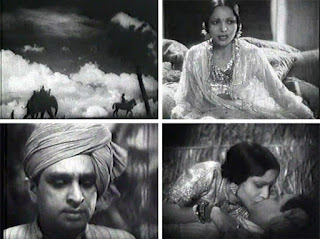 The first English song in a Hindi film was sung by Devika Rani in 1933 film Karma, starring Devika Rani and Himanshu Rai. The film was among the first Talkie Film in India to feature an on-screen kiss. The four-minute-long scene between Devika Rani and Rai, her husband in real life, is also known to being the longest such scene in Indian cinema.
The song, ‘Now The Moon Her Light Has Shed’ is a proper western tune composed by German composer Ornest Broadhurst and song. The style is typical of the high pitched English songs The next English song was sung by Shanta Apte, composed by Keshav Bhole in Duniya Na Mane (1937) with the lyrics around poet Henry Wadsworth Longfellow’s poem A Psalm of Life.
The story is about a princess (played by Devika Rani) who falls in love with a neighboring prince ( Himanshu Rai) much to the disapproval of the latter's father. The film opens with a very cute scene of the Prince telling a squirrel how much he loves the Maharani, who is hiding behind a rock and replies on behalf of the squirrel.
Maharaja, the prince father who knew that his son is in love with the princess, consults with his holy man on what to do about his recalcitrant son’s ongoing romance. The priest wisely counsels him not to interfere, but to allow them to marry and then control her through the alliance.
English language Song by Devika Rani