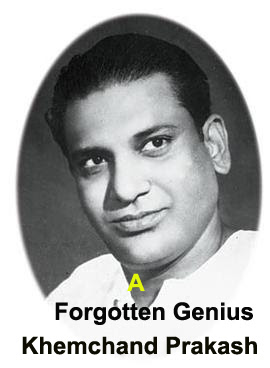 Khemchand Prakash (12 December 1907 – 10 August 1949) is immortal to the music lovers who like old Bollywood songs. Very few of us know that greats like Lata Mangeshkar, Kishore Kumar, Naushad, Manna Dey, and Bulo C Rani were mentored by him. But the creator of these musical gems and the mentor of this league of stalwarts is now largely forgotten. On his Death Anniversary, I pay my tribute to this great composer who composed the song Aayega Aane Wala Aayega sung by Lata Mangeshkar.

He got his training of music from his father Pt. Goverdhan Prasad was a renowned Dhrupad singer who received royal patronage and sang in the Jaipur Durbar. Khemchand was not only a trained classical singer but also mastered the Rajasthani folk music and trained as a Kathak dancer. Once the king of Nepal was in Jaipur, he saw him performing there, invited him to come to his Kingdom. He went there and spent 5 years in Nepal.

The destiny landed him in Kolkata and he joined the legendary New Theaters. While working in New Theatres, he had a chance encounter with Prithviraj Kapoor, and they became lifelong friends. At his suggestion, Khemchand Prakash moved to Bombay along with Kidar Sharma, KN Singh, and last but not the least, the much-celebrated KL Saigal.

He was assistant to composer Timir Baran in Devdas (1935 film), and he sang a comedy song 'lo kha lo madam khaanaa' in Street Singer (1938). He made his debut as music director in 1939 with Supreme Pictures' films Meri Aankhein and Gazi Salauddin and was soon signed up by Ranjit Movietone Film Studio.

In this film, the great music director Naushad was his assistant. Khemchand Prakash used the Arabic style of orchestration to synchronise the ambience of the subject. He also composed Mirza Ghalib's famed ghazal, 'Kabhi neki bhi uske jee mein gar,' in Kalyani's voice. He got another offer for Dwarka Khosla's Meri Aankhein, wherein singer-actor Khursheed got her maiden break and sang 'Aisa geet suna jao' and 'Sach ke khel khilaye aasha,' 'Doodh piyo sab doodh'. These two films established Khemchand and in times to come, he gave classical gems to music lovers. Khursheed was his leading singer and both of them gave many hits of the early 40s.

Khemchand tasted real success when he joined Ranjit Movietone and accomplished nineteen films during his five-year stint. His films, Pardesi and Shaadi became hits. Pardesi had a ghazal, 'Pahle jo Mohabbat se inkar kiya hota' (Khursheed), which became an instant rage. It is said that Khursheed rehearsed this ghazal for fifteen days before recording it.

Prabhu Ka Ghar (1945) was the last film he composed music for Ranjeet Movietone, the same year his movie Dhanna Bhagat directed by Kidar Sharma had 'Panchhi pinjara hua purana' (Khan Mastana), that also became quite popular. He had differences with the owner Chandu Lal Shah of  Ranjeet Movietone on the issue of using a new voice in a film. Chandu Lal Shah didn't agree and outright rejected the new voice. The new voice was that of Lata Mangeshkar. Thereafter, Khemchand Prakash started freelancing.

1948 marked yet another significant film of his career, Bombay Talkies’s Ziddi. He gave first major break to Kishore Kumar as a singer for the song "Marne ki duaaen kyun maangu".Ziddi featured a beautiful song of Lata Mangeshkar "Chanda re ja re ja re".Lata sang for him for the first time in Asha released in 1948.

Kishore Sahu had Khemchand in his own home production 'Rimjhim'. He composed a rare gem for Kishore, 'Jagmag jagmag karta nikla chaand poonam ka pyaara' This film also had a super hit number in Shamshad's voice, 'Na tum aaye na neend aayi'. Kishore Sahu and Khemchand again came together in Sawan Aya Re, which had all-time greats of Rafi-Shamshad, 'Aye dil na mujhe yaad dila baatein purani.'In the same year released the film Mahal, its song 'Aayega Aane Wala' became a hit and made Lata a household name. The film and its music became a super hit, unfortunately, Khemchan Prakash died before the release of this film. He died at an early age of 41 on 10 August 1949 due to Cirrhosis.