Vyjaynthimala- The Dancing Queen of Bollywood 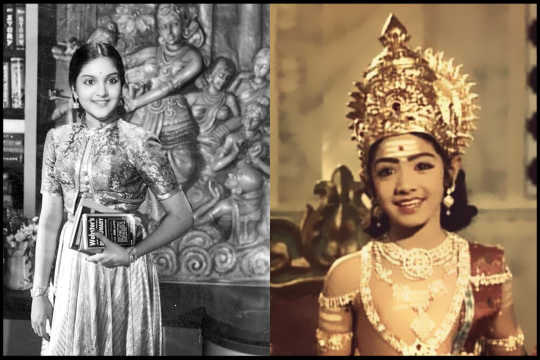 Vyjayanthimala Bali celebrates her birthday on the 13th of August. She shares this birthday with another Bollywood legend Sridevi who was also a multilingual actress with superior dancing prowess. Both the actresses married Punjabi men who left their first wives.

At the age of seven, Vyjayanthimala was chosen to perform a classical Indian dance for Pope Pius XII while her mother was an audience in 1940 at Vatican City. She learned Bharata Natyam from Guru Vazhuvoor Ramiah Pillai and Carnatic music from Manakkal Sivaraja Iyer. She had her arangetram at the age of 13 and started performing in Tamil Nadu later.

She made her debut in the Tamil language film Vaazhkai in 1949 on the basis of her dance performance of Bharata Natyam in Chennai's Gokhale Hall. The success of her Tamil film Vazhkai in South India inspired AVM Productions to remake it in Hindi as Bahar in 1951. In their first Hindi venture, they decided to cast Vyjayanthimala again in the lead role with Karan Dewan, The film became a hit and also its music and dances. The next film 'Ladki' released in 1953 was opposite Kishore Kumar and Bharat Bhushan.

In 1954, Vyjayanthimala acted in the magnum opus film Nagin with Pradeep Kumar. The film got favorable responses from the audience and became the highest-grossing movie of 1954 where it was labeled as a blockbuster. Her performance as the Nagi tribe's chief got Mala favorable reviews from the critics, as in 1955,

Nagin was a precursor to her rise in Hindi cinema as an iconic actor, who combined her talents, performing and dancing, to rule the screen on her terms... biggest recall values of Nagin are Vyjayanthimala". Post Nagin Vyjayanthimala had established herself as one of the leading actresses in Bollywood because of the film's nationwide success.

Vyjayanthimala's influence on films has been far-reaching. With her, semiclassical dance became an integral part of almost every Hindi film heroine's resume.At her peak, Vyjayanthimala took off to do a series of much-appreciated dance shows in Paris in 1959 besides working for top actors like Dilip Kumar in Paigham (1959) and Raj Kapoor in Nazrana (1961).

Vyjayanthimala has won four awards from five nominations, including a Lifetime Achievement Award for her contribution to Bollywood. She was the first person to decline the Filmfare Best Supporting Actress Award for Devdas, as she stated that the roles of Chandramukhi and Paro, played by Vyjayanthimala and Suchitra Sen respectively, were parallel and of equal  importance

In this blog, I am posting a few of her best dance songs.