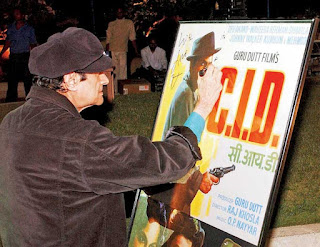 Dev Anand was only eighteen and half years old when he left from Lahore to Bombay to become an actor in Hindi films.He landed at Bombay Central station by frontier mail with 30 rupees in his pocket.In an interview he said that he came to Bombay either to become a journalist or an actor.
He didn't get the role immediately,he did insignificant  roles in theatre He was noticed by a person who was in Prabhat studio who told Dev that Prabhat Studio is looking for a new hero in their upcoming film. Prabhat studio was in Pune. It was in 1945 he got the role in the film Hum Ek Hain which was made in 1946 but released in 1947 after independence.
During his struggling days in Mumbai, Dev Anand worked as a clerk in an accountancy firm for a meager salary of Rs 85 to make ends meet. He also worked at the Military Censor Office and earned Rs. 160 before becoming an actor.In the struggling days once he had no money,he had to sell his stamp collection the only possession he had for meager 30 Rs  to a pavement dweller.
After he got Hum Ek Hain a few other indifferent films ( Mohan and Aage Badho in 1947) followed and it was not until Ziddi in 1948 that he got success.A year later Dev Anand launched his production company Navketan the first film was Afsar directed by Chetan Anand which was average at Box Office and its second film Baazi (The Gamble), directed by newcomer Guru Dutt, became a huge success

Song from Ziddi 1948 First Song of Kishore Kumar of Bollywood

Song from Ziddi 1948 The First Duet of Kishore and Lata