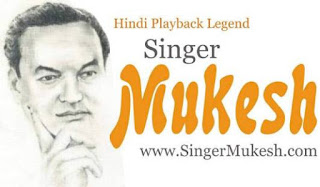 Similar to the story of Eklavya, Mukesh initiated in music.He started learning music indirectly  from his sister’s Guruji . He would listen from the next room and keep practicing until the day.Those days K L Saigal was the star singer actor.Like every body
KL Saigal was Mukesh’s idol.He wanted to be like him. Mukesh had good looks and his nature was very industrious, thus trying his luck at acting was natural for him.It was the actor Motilal who was his relative attended the marriage of Mukesh's sister at Delhi where he heard Mukesh singing a song.He liked his singing and advised him to come to Bombay and try his luck in films.
After few months Mukesh saw an advertisement in a News Paper from Ranjit Movitone for requirement of Actor cum Singer.He applied for this and was called to Bombay for an interview.It was Chandulal Shah of Ranjit Movietone who selected him and gave him the job.
He got his first project as an actor-singer in a film named Nirdosh in 1941 which has his first song ‘Dil hi ho bujha hua to’.His second film was Adab Arz in 1943.He acted as a hero in the film Mashooka in 1953, opposite Suraiya. During these period he sang and acted in few films but his career was not rising.It was in 1945 when Moti Lal asked Anil Biswas to take Mukesh as his playback singer for the film Pehli Nazar.The song he sang for the film was "Dil Jalta Hai To Jalne De".This song became so popular which opened the door of success for Mukesh.
Mukesh was such a fan of singer K. L. Saigal that in his early years of playback singing he used to imitate his idol. In fact, it is said that when K. L. Saigal first heard the song "Dil Jalta Hai...", he remarked, "That's strange, I don't recall singing that song"
It was  music director Naushad Ali, who helped Mukesh to come out of his Saigal style and create his own style. Naushad gave him songs for the film Andaz. Initially Mukesh was the ghost voice of Dilip Kumar in this movie and Mohammed Rafi sang for Raj Kapoor. He delivered many Hits for Naushad in films like: Anokhi Ada (1948), Mela (1948), Andaz (1949). Other composers who used Mukesh voice for great Dilip Kumar in hit songs like "Jeevan Sapna toot gaya" were Anil Biswas in Anokha Pyar, Ye Mera Diwanapan hai, Shankar-Jaikishan in Yahudi and Suhana Safar and Dil Tadap Tadap ke, Salil Choudhary in Madhumati. However, later Dilip Kumar choose Rafi as his ghost voice and Mukesh became the ghost voice of Raj Kapoor. Mukesh recorded highest number of songs for Shankar Jaikishan ie 133 songs followed by kalyanji Anandji ie 99 songs. Out of 4 Filmfare awards, Mukesh won 3 awards for Shankar Jaikishan songs. 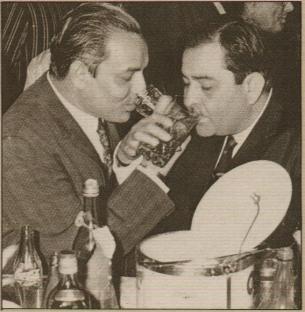 The duo of Raj Kapoor and Mukesh had hell lots of songs among which the most remembered and played is ‘Awara Hoon’. This song has lived almost 65 years yet kids know this song and the song is so stuck in everyone’s mind. Other famous songs were Mera Joota hai Japani, Jeena yahan marna yahan, Dost dost na raha, Jaane kaha gaye vo din, Kisiki muskurahaton pe, Ichak Daana beechak Daana, Sajan re jhoot mat bolo, Ramaiya vastavaiya, Dum Dum Diga Diga, Vo subah kabhi to aayegi, Kehta hai Joker saara jamana, Begaani shaadi me Abdullah deewana.The first song Mukesh sang for Raj kapoor was ‘Zinda hoon is tarah’ in 1948 film Aag, the lifelong partnership started from this song.
Like Talat, Mukesh also had an inherent sadness in his voice. So songs like ‘Woh tere pyar ka gham’, ‘Saranga teri yaad mein’ or ‘Baharon ne mera chaman lootkar’ sounded even more soulful in his voice. But unlike Talat, he could even belt out light numbers with gay abandon. Songs like ‘Ruk jaa o jaanewali ruk jaa’, ‘Aasman pe hai khuda aur zameen pe hum’ or ‘Bina badra ke bijuriya kaise chamke’ confirmed this time and again.
Many critics derided him as an imperfect singer who had a nasal twang and who would often miss a note or a beat and many a time they had a valid point. His limited vocal range also made high-pitched songs difficult for him. Mukesh proved them wrong
After Shankar Jaikishan Mukesh sang lot of songs for Kalyanji Anandji  "Naina hai jadoo bhare..." Bedard Zamana Kya Jane (1958) composed by Kalyanji alone as Kalyanji Virji Shah, and "Main hoon mast madari..." Madari (1959) as the first Kalyanji-Anandji-Mukesh combo, to "Chahe aaj mujhe napasand karo" Darinda/ 1977, the K-A, Mukesh combination gave numerous popular songs like "Chhalia mera naam...", "Mere toote hue dil se...", "Dum dum diga diga" Chalia(1959), "Mujhko iss raat ki tanhai mein..." Dil Bhi Tera Hum Bhi Tere(1960), "Hum chhod chale hain mehfil ko..." (Ji Chahta Hai), "Humne tumko pyar kiya hai jitna..." (Dulha Dulhan), "Chal mere dil lehraake chal..." Ishara and "Dheere se chalo..." Johar Mehmood in Goa,"Main to ek khwab hoon..." and "Chand si mehbooba ho..." Himalay Ki Godmein(1965), "Waqt kartaa jo wafaa..." Dil Ne Pukara,"Deewanon se yeh mat poocho..." Upkar, "Khush raho har khushi hai..." Suhaag Raat and "Humsafar ab yeh safar kat jaayega..." Juari, "Chandi ki deewaar..." and "Le chal le chal mere jeevan saathi..." Vishwas (1969), "Koi jab tumhara hriday tod de..." Purab Aur Paschim, "Darpan ko dekha..." Upaasna, "Jo tumko ho pasand..." Safar and "Mujhe nahin poochni tumse beeti baatein..." Anjaan Raahein (1970).
Mukesh died of a heart attack on 27 August 1976 in Detroit, Michigan, US, where he had gone to perform in a concert. That morning, he got up early and went to take a shower. He came out panting and complaining of chest pains. He was rushed to a hospital but was pronounced dead. The rest of the concert was completed by Lata Mangeshkar and surprisingly his son Nitin Mukesh . His body was flown to India by Lata Mangeshkar, where a grand funeral ceremony was held in the presence of several actors, with personalities of the Indian film industry and fans paying tribute.
Mukesh had the voice that could paint a thousand shades of melancholy. The way he sang, with the perfect tone and diction, he was considered as second to none. The pain that he had in his voice could not be imitated by anyone else.

SONGS THAT WON HIM FILMFARE