It was Devika Rani who gave Kohinoor to Bollywood 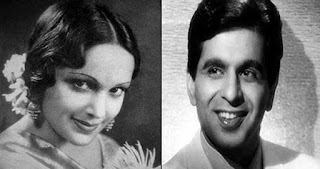 Devika Rani who is also known as The First Lady of Bollywood gave us a Kohinoor in the form of Dalip Kumar. It happened when Dilip Kumar aka Yusuf Khan first arrived from Poona in Bombay looking for a job, he met Dr Masani at Churchgate station. The psychologist knew Khan from a lecture he had delivered at Wilson College where the young man had been a student.
Dr Masani introduced Yusuf Khan to Devika Rani who was the owner of Bombay Talkies. Devika Rani asked him if he knew Urdu; Khan did, as he was born and brought up in Peshawar in the North West Frontier Province. Devika Rani then offered him an opportunity to become an actor with the studio for a princely monthly salary of Rs1,250. It was Devika Rani who christened Dilip Kumar. The first film of Dilip Saheb was Jwar Bhata released in 1944 was directed by Amiya Chakrabarti. 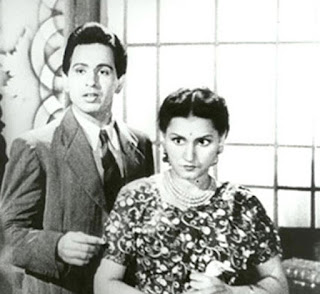 Still from Jwar Bhata 1944
Besides grooming him for a career in front of the camera, Devika Rani also helped shape Dilip Kumar's acting and performances, encouraging him to watch Hollywood and foreign films and look for inspiration within himself to improve with each film that he did.
Unfortunately, Jwar Bhata did not fare well at the box office. Yet his talent did not go unnoticed and following India’s independence and partition, Dilip Kumar would go onto make his mark in Hindi cinema. 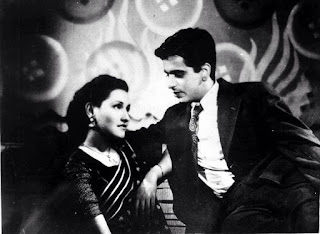 Still from Jugnu 1947
However, it was the actor’s fourth film, Jugnu (1947), starring Noor Jehan and Shashikala in important roles, that became his first major hit, and got him noticed. The actor received many movies after this film. 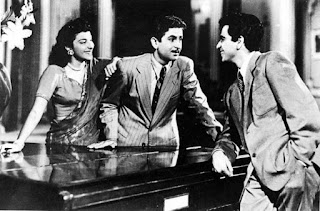 One of the films which elevated him to superstardom was Mehboob Khan’s Andaz (1949) with Raj Kapoor.A story revolving around a love triangle, interspersed with drama and tragedy The film saw him paired opposite Nargis. The film became an instant hit at the box office and enabled Dilip Kumar to establish himself as one of the reigning figures of the Indian film industry.
He had a number of big films in the 1950s. Among his most notable films were Hulchul (1951), Deedar (1951), Daag (1952) and Devdas (1955). Dilip Kumar became the first actor to win the Filmfare Best Actor Award for Daag. He went on to win the award seven times.  His performance as the heartbroken Devdas in Devdas, among other roles, sealed his image as the Tragedy King of Indian cinema. However, he tried to shed this image by taking up lighter roles in films such as Aan (1952), Azaad (1955), Naya Daur (1957), Madhumati (1958), Mughal e Azam (1960) and Kohinoor (1960).
In 1961, Kumar produced and starred in Ganga Jamuna opposite his frequent leading lady Vyjayanthimala and his brother Nasir Khan, this was the only film he produced.His next film Leader (1964) was a below average grosser at the box office.He was the co-director alongside Abdul Rashid Kardar of his next release Dil Diya Dard Liya in 1966 but was uncredited as director. In 1967, Kumar played a dual role of twins separated at birth in the hit film Ram Aur Shyam. In 1968, he starred alongside Manoj Kumar and Waheeda Rehman in Aadmi. That same year he starred in Sangharsh with Sanjeev Kumar.
His career slumped in the 1970s with films like Dastaan (1972) failing at the box office. He starred alongside his real-life wife Saira Banu in Gopi (1970) which was a success. But again in 1974 his film Sagina and Bairag in 1976 failed as a hero.
In 1976, Dilip Kumar took a five-year break from film performances and returned with a character role in the film Kranti (1981) and continued his career playing leading roles in films such as Shakti (1982), Karma (1986) and Saudagar (1991). His last film was Qila (1998).He has won ten Filmfare Awards and is the first recipient of the Filmfare Best Actor Award (1954). He was given Dada Saheb falke award in 1994. The Government of India honoured Kumar with the Padma Bhushan in 1991, the Dadasaheb Phalke Award in 1994 and the Padma Vibhushan in 2015. The Government of Pakistan conferred Kumar with Nishan-e-Imtiaz, the highest civilian award in Pakistan, in 1998.
My Fav Dilip Kumar's Songs