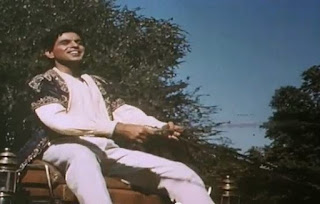 During the 50s and 60s Horse Beat or Tonga, songs were very common. Those days Tongas were the main mean of transport in Indian cities. Victoria which was also called a Tonga or Baggi which was pulled by or trotted by one or two horses produces a typical rhythm. The musical notes of a horse’s galloping have remained etched in our memories even today.
It is believed that O P Nayyar is the music director who gave us the Tonga or Horse beat songs but that is not true. Before O P Nayyar it was S D Burman, Naushad, Roshan who gave many of these beats songs. Remember the song of Deedar (1951) Bachpan Ke Din Bhula Na Dena and the song of Bawre Nain(1950) Ghir ghir ke aasmaan par chhaane lagi ghataayen with one of my fav singer Raj Kumari singing for my fav actress Geeta Bali.
On researching the songs with horse beats, I came across the song  Chale pavan ki chaal by Pankaj Mullick from Doctor (1941), This is the earliest known instance of such a song I could stumble upon.

Another tonga beat song of the 40s is from V Shantaram's film Doctor Kotnis Ki Amar Kahani 1946.In this song Dr Kotnis (Shantaram) is singing while plying the cart, calling on people to come forth for service, and stresses even sacrifice of life in the process. The music was given by  Vasant Desai.

In 1950 S D Burman was another music director who gave the beats from instruments in an immortal song written by Kavi Pradeep, sung by Manna De for the film Mashaal 1950

Roshan who made his debut from Kidar Sharma's film Neki Aur Badi in 1949. Despite the disaster of their first film together (Neki Aur Badi, 1949) he gave him a second chance in the film Bawre Nain. The roaring success of the songs shows how legends are created. Roshan never looked back after that. In this film he used these beats in this song
Song of Bawre Nain(1950)

Let me now present the song from where O P Nayyar became synonymous with ghoda gaadi beats. The song is Piya piya piya by Asha Bhonsle & Kishore Kumar from Baap Re Baap (1955)

OP Nayyar is in his elements and ticks off another successful composition.