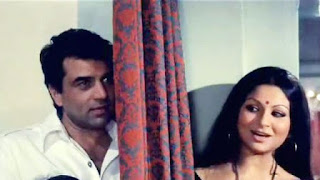 Apart from sharing great chemistry in the films Dharmendra and Sharmila Tagore also share their birthday 0n the 8th of Dec. The first film they worked together was Anupama in 1966 directed by Hrishikesh Mukherjee.
The same director-actor trio joined together for a second time to give us Satyakam in 1969. The third time the same trio gave us the Hindi cinema's one of its all-time great comedy films Chupke Chupke in 1975.
They worked together as Hero and Heroine in films like Devar, Mere Humdam Mere Dost, Ek Mahal Ho Sapnon Ka, and Yakeen.  Their last film together was Sunny in 1984 Directed by Raj Khosla, the film had Dharmendra playing father to his real-life son Sunny Deol while Sharmila played the prostitute giving birth to Sunny Deol
Dharmendra, who was born on 8th Dec 1935, debuted with Arjun Hingorani's Dil Bhi Tera Hum Bhi Tere in 1960. He became a star with Phool Aur Patthar (1966), He formed a successful pairing with Meena Kumari and shared the screen in 7 films namely Main Bhi Ladki Hoon (1964), Kaajal (1965), Purnima (1965), Phool Aur Patthar (1966), Majhli Didi (1967), Chandan Ka Palna (1967) and Baharon Ki Manzil (1968).
His most successful pairing was with Hema Malini, who went on to become his wife.[The couple played together in many films including Raja Jani, Seeta Aur Geeta, Sharafat, Naya Zamana, Patthar Aur Payal, Tum Haseen Main Jawaan, Jugnu, Dost, Charas, Maa, Chacha Bhatija, Azaad, and Sholay
Sharmila Tagore is 9 years younger to Dharmendra She is born on  8 th December 1944. She debuted in Bollywood with Shakti Samanta's Kashmir Ki Kali in 1964. Later she did many films with Shakti  Samanta. Samanta cast her in many more films, including An Evening in Paris (1967), in which she became the first Indian actress to appear in a bikini, Samanta later teamed up Sharmila with Rajesh Khanna for movies such as Aradhana (1969) and Amar Prem (1972). The pair of Khanna-Sharmila gave 7 box office hits like  – Aradhana, Safar, Amar Prem, Chhoti Bahu, Daag, "Raja Rani" and Avishkaar