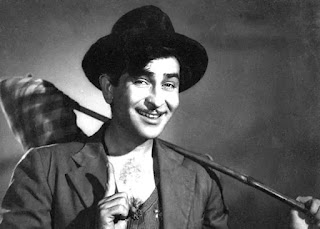 Raj Kapoor, the Greatest Showman of Bollywood started as a Clapper Boy assisting Kidar Sharma. Raj Kapoor appeared in a film for the first time at the age of ten in  1935's Inquilab. He appeared as a child artist in many more films It was his Guru Kidar Sharma, who introduced him in the lead role in Neel Kamal (1947) opposite Madhubala in her first role as a leading lady.
In 1948, at the age of twenty-four, he established his own studio, R. K. Films, and became the youngest film director of his time making his directorial debut with Aag starring himself, Nargis, Kamini Kaushal, and Premnath.
On Raj's 95th birth anniversary today, I give a lowdown on his films which you have and will continue to watch multiple times.

Song of Aag 1948
Aag (1948): This 1948 Bollywood flick, which marked Raj Kapoor's debut as producer and director, was the first of several films in which he was paired opposite Nargis. Interestingly, the film also starred Raj's youngest brother Shashi Kapoor as a child artiste. Shashi had essayed the role of the younger version of Kewal, the character which Raj played.


Song of Andaz 1949
He got real recognition from 1949 film Andaz, he co-starred alongside Dilip Kumar and Nargis in that film. Though Andaz is talked about its unique casting coup of bringing together  Dilip Kumar and Raj Kapoor, it must be admitted that at the time of Andaz’s making, both were just beginning to become stars Andaz took Nargis right to the top and established her without doubt as India’s finest dramatic actress. Dilip Kumar too consolidated on his image of paying the tragic lover   Raj Kapoor in the more difficult role of the husband suspecting his wife’s infidelity more than manages to match strides with Dilip Kumar while showcasing the comic side of his personality

Song of Barsaat (1949)
Released in 1949, the film starred the already popular Bollywood onscreen couple - Raj Kapoor and Nargis. Actress Nimmi was launched in the film industry with this film. Barsaat is referred to as one of the first key successful films which Raj had directed. Such was the success of the film that it enabled Kapoor to purchase RK Studios in 1950.

Song of Awara (1951)
Produced and directed by Raj Kapoor, and written by Khwaja Ahmad Abbas. It stars Raj Kapoor, Nargis, Prithviraj Kapoor. Awaara is considered a milestone in the history of Bollywood. In the film, Kapoor's poor, innocent "little tramp" character references Charlie Chaplin and was further developed in other Kapoor films such as Shree 420.


Song of Chori Chori (1956)
This was not a RK film but was an AVM Film.The film starred Raj Kapoor and Nargis again and it was the last film they worked together as Hero and Heroine. The film was a musical hit.Raj Kapoor played a Daku for the first time.

Song of Anari (1959)
The film stars Raj Kapoor, Nutan, Motilal, and Lalita Pawar. This was among the few movies in which Lalita Pawar played a positive role and Motilal a role with shades of grey. The film was directed by Hrishikesh Mukharjee. Raj Kapoor got a Filmfare Award for this film.

Song of Jis Desh Men Ganga Behti Hai (1960)
Directed by Radhu Karmakar and produced by Raj Kapoor, the film was a hit at the Box Office. Raj played the role of a poor friendly orphan who ekes out a livelihood by crooning songs.

Song of Mera Naam Joker (1970)
It's an RK Film The film was made over six years and a huge portion of the money invested came from Raj's personal fortune. The film stars Kapoor as the eponymous character, with Simi Garewal, Kseniya Ryabinkina and Padmini in supporting roles.The film was partly made with the participation of Soviet actors and was partly shot in Moscow. The film was rejected by audiences and critics, putting Kapoor into a financial crisis,

Song of Bobby 1973
After the debacle of Joker, this was the film Raj Kapoor produced and directed It was a Teenager's love story having his son Rishi Kapoor and a newcomer Dimple Kapadiahe film became a trendsetter    The film became a blockbuster, the top-grossing Indian hit of 1973, the second-top-grossing hit of the 1970s at the Indian box office
Posted by /bolywoodfiles.blogspot.com at 09:34:00