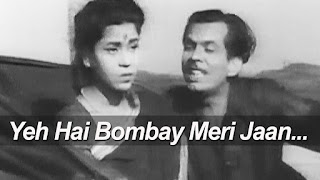 Bollywood, India’s largest and one of the world’s largest film industries is synonymous with Mumbai earlier known as Bombay. The city has accordingly established itself as the film capital of India. It is where many Bollywood story lines are based. Mumbai can be an extremely challenging city, but this city of dreams has an enduring spirit and a never-say-die ethos. This underlying energy of the city and its forward-looking attitude is best captured through many songs.
In this Blog I have selected those songs  which have references to Bombay / Bambai. As I search, I continue to find good, unheard and un-posted songs that fit the reference criteria.

Song from Holiday in Bombay 1963