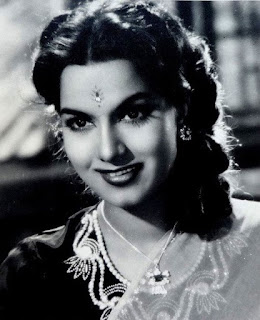 Shyama was born as Khursheed Akhtar in Lahore on June 7, 1935. She made her debut as a teenager in a qawwali in Shaukat Hussain Rizvi’s Zeenat (1945). She was renamed Shyama by the filmmaker Vijay Bhatt, and appeared in numerous films in the 1940s and mid-’50s.She was the impish girl in dungarees in Aar Paar (1954) and the qawwali singer in Barsaat ki Raat(1960).
She has been filmed in some wonderful songs in the 50s. An early song where Shyama first made an impact is the second version of the main love duet, ‘Tu Mera Chand Main Teri Chandni’, from A.R. Kardar’s Dillagi (1949) starring Suraiya and Shyam. The original version was filmed on the stars, but this version on Shyama voiced by Geeta Dutt is less known.
There was magic whenever Geeta Dutt lent her voice for Shyama. This vibrant singer and exuberant actress complemented each other perfectly through several films be it Shrimatiji, Aar Paar, Musafir Khana (1955) or Chhoo Mantar (1956). But if one song truly stood out in their collaboration, it has to be the beautiful ditty from Bhai Bhai composed by Madan Mohan, Ae Dil Mujhe Bata De.
Shyama also made a popular team with filmmaker M. Sadiq, comedian Johnny Walker and composer O.P. Nayyar in several films – Musafir Khana, Chhoo Mantar, Mai Baap (1957), Duniya Rang Rangeeli (1957) and Johnny Walker (1957). In the last, Walker played an alcoholic who pretends to abstain from alcohol making Shyama fall in love with him. The film had two lovely duets by Asha Bhosle and Geeta Dutt, filmed on Sheila Vaz and Shyama including the fabulous Thandi Thandi Hawa. Asha Bhosle, by now becoming Nayyar’s main singer, lends her voice for heroine Shyama.
Shyama started her career from the bottom of the ladder but soon worked with the Top Heroes Of Golden Era with Dev Anand in Sazaa 1951 , Tarana with Dilip Kumar ,Raj Kapoor in Sharda and with Guru Dutt in Aar Paar.
She acted a serious character in Bimal Roy’s Maa with equal ease. Came Shart, another acting triumph of hers. Since then she played all sorts of roles in all sorts of pictures. Her notable films include Chandan, Sharda, Mirza Sahiban, Aar Paar etc. She topped her acting triumphs by her memorable double role in Do Behnen. Her work in Sharda brought her the 1959 Filmfare award for best supporting role.
In later years, her memorable roles came in films of Rajesh Khanna such as Masterji and 'Ajanabee (1974 film) and others such as Sawan Bhadon and Dil Diya Dard Liya.She was married to cinematographer Fali Mistry in 1953. The couple had three children, two sons, Faroukh and Rohinton, and a daughter Shirrin. Fali Mistry died in 1979, thereafter she continued to stay in Mumbai.
Shyama died on 14 November 2017 due to a lung infection at the age of 82. She is buried at Badakabarastan, Marine Lines.She was given Dada Saheb Phalke Award.