For Dev Anand,flirtation was an innocent pastime 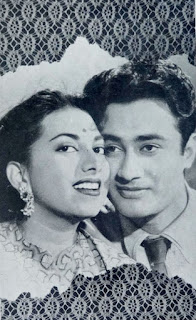 Dev Anand was the heartthrob of millions. Women swooned over his toothy smile, rakish charm and incredible sex appeal.In this blog I will discuss the girls whom Dev Anand loved or had an Affair. In his autobiography Romancing with life unhesitatingly he reveals his affairs. According to him, he was not a skirt chaser in real life. It was the women who took the initiative and Dev simply responded.
One of his earliest loves was the daughter of a History professor of the collage where he was studying.. Though he deeply admired her, he never dared to propose to her and let his crush remain untold. After completing graduation with Honours in English from Government College, Lahore, he decided to move to Bombay to pursue a career in films.
There was a beautiful young girl named Usha who frantically ran onto the Lahore railway platform trying to board the Frontier Mail that was taking Dev Anand to Bombay on his journey of no return. “Hold my hand! Hold my hand! I want to come with you!”, she was shouting in vain as the train moved faster and faster, leaving behind the hapless girl crying. Then there was one Florence in Gurdaspur who one evening literally chased Dev and thrust a passionate kiss on his lips. He then, as also later, was too shy in expressing his love; he blushed and ran into her mother’s kitchen for a hot meal. They were not the only heartbroken girls whom Dev left behind; there were many more yearning for him.
After reaching Bombay he struggled for 3 years to get his first film.In between he took a job in a govt office Bombay which provided Dev Anand a much larger canvas to fine-tune his art of flirtation. There were more women than men in the Censor office in Bombay where Dev Anand had found a temporary job as a clerk during World War II. There too, he practiced his art of flirtation albeit with greater finesse and received instant response from his female colleagues. For Dev, flirtation was an innocent pastime, nothing more and nothing less; a playful game sans any serious intention.

His first break was a Prabhat Studios production P.L. Santoshi's Hum Ek Hain, a film on Hindu/Muslim ties. The film was being shot in Pune. Since he was based in Bombay, he often travelled by train to reach Pune. During one of the journeys at night, he had a memorable encounter. He was alone in his compartment. At one station, an attractive woman in her mid-thirties, along with a fair-skinned man, entered the compartment. Both of them climbed the upper berth and became intimate. Soon the man left but the woman stayed on. She then seduced Dev. The first Real Love of Dev Anand was with Suraiya. He had made his mark as a romantic lover-boy with his affair with Suraiya.The duo acted together in seven films in the following three years; all the pictures were big hits. In the year 1949 alone, they had co-starred in three movies. With each movie, the two came closer and closer despite the watchful and suspicious eye of Suraiya’s granny. However, due to the staunch opposition from her orthodox family, the affair soon came to an end and Dev was left heart-broken. Not for long though. While casting for his next film, he met Kalpana Kartik and the pair signed up for several films together. Soon they started dating. Kalpana was smitten by Dev and made him forget the pain caused by his relationship with Suraiya. She was a very playful girl and turned out to be just as romantic as Dev, so the two got along very well. 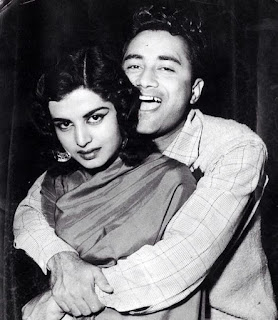 Dev in his Romancing with Life says "Mona (Kalpna Kartik) became an important part of my life. She started conquering me, and I willingly let myself be conquered,”.They starred together in a few successful pictures, and finally after the roaring success of “Taxi Driver”, the two tied the nuptial knot in a secret marriage in 1954.
He even had an on-off relationship with an Irish student at Cambridge while she worked as a cleaner in his Swiss hotel. 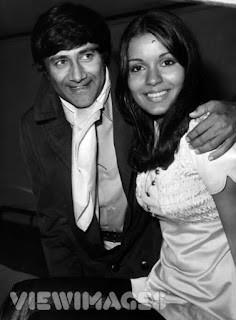 While filming Hare Rama Hare Krishna he was besotted by Zeenat Aman. Dev confesses to developing feelings for her as well. When the newspapers reported their link-up, he didn’t seem to mind it! “Whenever and wherever she was talked about glowingly, I loved it; and whenever and wherever I was discussed in the same vein, she was jubilant. In the subconscious, we had become emotionally attached to each other," Dev Anand wrote in his autobiography. He further stated, “Suddenly, one day I felt I was desperately in love with Zeenat and wanted to say so to her! To make an honest confession, at a very special, exclusive place meant for romance.” Apparently Dev wanted to propose to his gorgeous co-star and asked her on a date.
Zeenat, however, did not want to be tied down either professionally or romantically. She ditched Dev for Raj Kapoor and made “Satyam Shivam Sundaram” under his banner. Dev Anand was once again heartbroken and desolate, his self-esteem severely dented.
But Dev Anand being Dev Anand, he continued with his flirtatious games both in India and abroad whenever he found an opportunity. He unabashedly flirted with Allena, a Czech interpreter in Prague. Later in his hotel room, Mona confronted him about her.
My 10 Favourite Romantic Songs Of Dev Anand