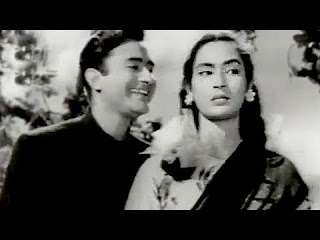 The literary meaning of "Chhed Chhad" in English is. teasing each other. It has roots in ancient Indian culture. We all know the stories of Lord Krishna teasing the Gopis. The Chhed Chhad of Jija Saali is acceptable in our culture. Similarly in our Hindi films, many songs are picturized in this genre. From Dev Anand to Kishore Kumar, Raj Kapoor to Shammi Kapoor and other heroes teasing heroines and sang songs in the films, Chhed Chhad has been an integral part of our culture. Within the Indian family structure, parents doing some leg-pulling of their children, or the siblings engaging in chhed chhad is not uncommon.
Dev Anand in the fifties had light touch within the storyline and darkness of criminal laces around the films. In almost every film there were songs picturized on Dev Anand which could be described as Chhed Chhad song. I think a maximum number of this type of songs were picturized on Dev Anand than any other hero. Think of Dev Anand wooing Nutan with ‘Maana janaab ne pukara nahin’, in  Paying Guest or Jeevan Ke Safar Mein Rahi from Munimji Dev Anand had performed in a large number of such songs, I present few of such chhed chhad songs.
The first song on my list is from 1951 film Sanam