The Story Behind the song "Khaike Paan Banaras Wala" 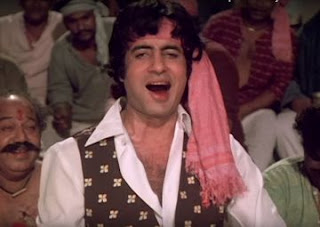 Very few  of us know that the famous Amitabh Bachchan's film song "Khaike Paan Banaras Wala"was not originally created for the film "Don" but it was composed for Dev Anand for the film Banarsi Babu released in 1973.
The music directors for both the films were Kalyanji Anandji. The song was written by Anjaan and  composed by Kalyanji Anandji. When this song was discussed with Dev Anand, he disliked it saying that this will not go with his image, so the song was not included in that film.The song remained in the collection of Kalyanji-Anandji.
The song was not even kept in Don earlier originally. The film shooting was completed and the film was under post production. It so happened that when the Director of the film Chandra Barot showed the film to his mentor Manoj Kumar to gather his advice. Manoj Kumar advised him that the film is going too fast, it needs some space to breathe, a song should be placed after the interval.
The music director Kalyanji-Anandji were called and were asked to compose one more song for the film urgently , they already had this song in their collection so they suggested this song to the Director. It was agreed by the producer and the director to get it recorded immediately.
When Kishore Kumar was contacted for singing this song he initially  refused to sing Khaike Paan Banarasiwala. The legendary singer said. 'I don't think I can sing this, please find another singer.'

"We pleaded with him. We said he was the best singer to sing it. Finally, he relented on one condition: He would sing it only once."
"If we liked it, good, otherwise, we would have to find another singer. It was agreed on Kishore Kumar's terrms. Kishore Kumar demanded paan while recording the song in the studio. He chewed the paan and spat it on the sheet spread on the floor. All the spitting and chewing that is heard in the song is all real.
We all know that this song became the USP of the film.
Song of Don 1978