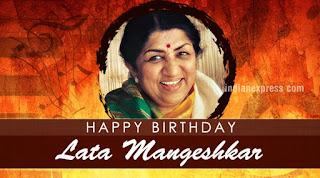 Lata Mangeshkar is a ‘voice of the nation’, an avatar of Goddess Saraswati who has sung over 25,000 songs. Many of these songs are immortal and it is very difficult to select fifteen songs out of countless immortal songs. Here I would like to point out some of her best songs, which are extremely melodious and immortal, sung with various music directors.
The first song in my list is Aayega Aane Wala from Mahal
The year was 1949. The film was Mahal; the composer Khemchand Prakash and the singer ­Lata Mangeshkar. It was an unforget­table, haunting audiovisual odyssey. An odyssey that marked the birth of a new era. The earlier era belonged to robust, rustic Punjabi voices like Shamshad Begum, Zohrabai Ambale­wali, Amirbai Karnataki, and Noor Je­han. Yet somehow composers like Shyamsunder, Husnlal-Bhagatram, Anil Biswas and Naushad started discovering something new, something different in Lata’s voice. With this song began an Era of Lata Mangeshkar which ended only when she left singing for films.

The same year in 1949 another solo song of Lata Mangeshkar became popular. The music of this hit song was composed by Shankar-Jaikishan and the lyrics were penned by Ramesh Shastry. The song is Hawa Mein Udta Jaye Mora Lal Dupatta Malmal Ka from R K Films Barsaat.

The next song in my list from the 1951 film Sazaa starring Dev Anand and Nimmi.the song is Tum Na Jaane Kis Jahan Mein Kho Gaye written by Rajendra Krishan and composed by S D Burman.

The same year(1951) another song of Lata became very popular. from the film, Naujawan. The music was composed by S.D. Burman and Sahir Ludhianvi wrote the lyrics. The movie is remembered for the hauntingly melodious song "Thandi Hawayein" by Lata Mangeshkar

This song “Ye zindagi usi ki hai jo kisi ka ho gaya” must be one of the most popular lines among all the Bollywood songs ever written. And kudos to Rajinder Krishan who penned these immortal lines. It was composed by C Ramchandra for 1954 film Anarkali. This song has two versions that play on different occasions in the movie. They can also be called happy and sad versions of the song

Man Dole Mera Tan Dole is from the film  Nagin(1955). The song was composed by Hemant Kumar and written by Rajendra Krishan.

Another immortal song from Lata is Aaja Re Pardesi from Madhumati. The soundtrack of Madhumati became the best-selling Bollywood soundtrack of 1958. Salil Chowdhury won his first Filmfare Award for Best Music Director

This song was composed by Naushad, written by Shakeel Badayuni, and sung by Lata Mangeshkar with a chorus. The song, when the film was first released, was in black and white. It is shot in a set inspired by the Sheesh Mahal of the AmberFort.of Jaipur. It was the most expensive Indian song up until then and remained the most expensive for decades

This immortal song "O Sajana Barkha Bahaar Aai".is from the 1960 film Parakh.Composed by Salil Chaudhary and written by Shailendra