Subodh Mukharjee - A Filmmaker of Golden Era of Bollywood 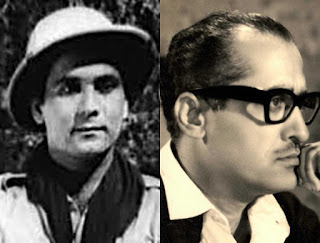 The younger brother of the doyen of Hindi films Shashdhar Mukherjee of Filmistan Studio. The studio that gave us Shaheed (1948), Shabnam (1949), Anarkali (1953), and Nagin(1954). Jagriti(1954),
Munimji 1955, Paying Guest 1957, Tumsa Nahin Dekha 1957
He directed Dev Anand in Munimji and Paying Guest and later started his own production house with Love Marriage. He introduced Saira Bano and made Shammi Kapoor a superstar with the 1961 film Junglee.
Subodh Mukharjee ( April 14, 1921- 21 May 2005) was a freedom fighter, he was in jail for 3 months. His elder brother Shashdhar pulled him away from the nationalist movement and engaged him film making.He was given the first film as an independent director Munimji The script was written by Nasir Hussain and the music was composed by S D Burman. The film was a hit. The song "Jeevan Ke Safar Mein Rahi," sung by Kishore Kumar, became a super hit. This team of Subodh Mukherjee, Nasir Hussain, Dev Anand, and music director S.D. Burman later got together to make another movie, Paying Guest, in 1957. In the same year,. Looking to this the Filmalaya decided to make another film Tumsa Nahin Dekho was released which was directed by Nasir Hussain, it was also successful so Filmalya gave Nasir Hussain another film to direct, this upset Subodh, e decided to start his own production house, the SMP Subodh Mukharjee Productions
The first film of this house was Love Marriage starring Dev Anand and Mala Sinha. This was the third film in a row under his direction All the three films were hit.
The next film under his direction and production house was Junglee with Shammi Kapoor. The film was a super hit. after Junglee he made April Fool in 1964 and Saaj Aur Awaz in 1966, both the films were average in Box Office.
In 1967 he produced Shagird, the direction was given to Samir Ganguly. The film stars Joy Mukherjee and Saira Banu in lead roles The film was a super hit. He then made two films simultaneously,
Abhinetri released in 1970 was directed by him and Sharmilee directed by Samir Ganguli was a hit. his was the last hit from SMP.
In the first two decades of his career, he had a high success percentage, but like so many movie-makers of his generation, he floundered from the seventies and quit in 1985. The last 2 films were Teesri Aankh 1982 and Ulta Seedha in 1985.