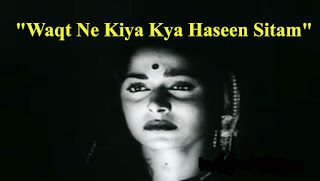 This iconic song from India's first Cinemascope film Kagaz Ke Phool is now 60 years old. This song was picturized on Waheeda Rehman and Guru Dutt. Geeta Dutt giving voice to Waheeda Rehman. We can feel The"Dard" (Pain) in the voice of Geeta Dutt. What a composition by great S D Burman and penned by another great Kaifi Azmi.
A song bringing forth the tragedy in romance, a song telling us about the inevitability of life in general!.The amazing camera frame by the legendry cinematographer V K Murthy, shadows and light are combined beautifully to create the situation and sad mood of the scene where Guru Dutt and Waheeda meet in an unexpected situation.
The situation of this song was not there in the original script. There were 5 songs for the script, those were already composed and recorded by Burman Da and everybody was relaxed. Suddenly Burman Da started humming a new tune which was light and with a glimpse of sorrow. Guru Dutt, who was sitting next to Burman Da liked this new tune and was deeply touched by this tune, he suggested Burman Da that let's have a song with this tune.
Kaifi Azmi, who was also sitting with them was asked to write for this tune. Kaifi Azmi who seldom write for the pre-composed tunes agreed. He immediately wrote the Mukhda of this song, initially, Guru Dutt was not happy with the Mukhda but Burman Da was very much impressed with the words, he insisted Gutu Dutt think once again, he felt that these lines were enough to bring tears in his eyes.
In the meantime, Burman Da asked Kaifi Azmi to write the two antra of this song. He then beautifully tuned these antra, he thought immediately that Geeta Dutt would give full emotions to this song. 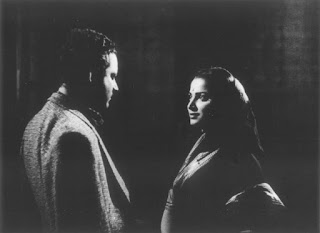 Burman Da called Geeta Dutt and asked her to sing this song in front of Guru Dutt. Guru Dutt liked the song and insisted on Burman Da to get it to record it for this film. The situation for this song was created and then picturized on Waheeda and himself.
When this song was shot, the relation between Waheeda and Guru Dutt were a hot topic. Kaifi Azmi wrote the lyrics with this in mind which later denied that he ever kept in mind about their relationship. However, this song became the highlight of the film.

The booming bass guitar, the soft piano, the tinkling triangle, the flowing strings – the orchestration of that song was mesmerizing. On-screen, a stunningly beautiful Waheeda and a somber, graceful Guru Dutt appearing in an exquisite light and shadow play of haunting black and white images then completed that masterpiece. 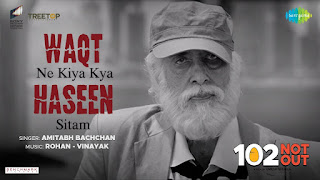 In 2018, after 59 years, there is a reference to this song in '102 Not Out'. Amitabh Bachchan who plays a 102-year-old man in the film recorded the track in his characteristic deep and booming voice. The song was arranged by Rohan Utpat and Vinayak K Salvi.