Talat Mahmood- The Singer, who gave us many Immortal Songs. 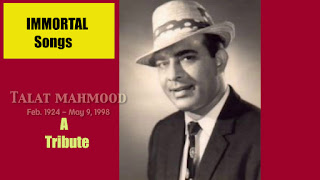 Talat Mahmood, the legendry singer of the Golden Era died on 8th May 1998 has given many Immortal songs to us. Although his peak barely spanned a decade, he has produced some of Bollywood's most treasured songs.  This accomplishment has earned him a place in our hearts and souls for all time to come.
Talat’s impeccable command over Urdu was the flavor of the films. Top music directors of that time were giving him songs. The first song he sang for Dilip Kumar was "Milte Hi Ankhe Dil Hua Deewana Kisi Ka" a duet from Babul 1950. He gave playback to all the big stars of that era such as Dev Anand, Raj Kapoor, Shammi Kapoor, and Sunil Dutt
His big break came with the song Ae dil mujhe aisi jagha le chal jahan koi na ho composed by music director Anil Biswas for the soundtrack of the movie Arzoo. The song proved to be extremely popular.
After Babul, he sang for Dilip Kumar in the 1951 film Tarana, the song "Seene Mei Sulagte Hai Arman" became super hit. The same year another song from Madhosh " Meri Yaad Mein Na Tum Aanso Bahana" also became hit.His voice was now being appreciated by all, most of the music directors were now giving him a chance. In 1952 he sang in 26 films, the songs of Daag and Anhonee became super hit. He sang for the first time for Raj Kapoor, this song" Mein Dil Hoon Ek Arman Bhara" is an immortal song.
Though he sang for Dev Anand in 1951 film Nadaan,"Aa Teri Tasvir Bana Loon"but the 1953 song "Andhe Jahan Ke Hum Hain" became hit. The same year "Sham-E-Gham ki qassam" for Footpath and "Zindagi dene wale sun" for Dil E Nadaan were a massive hit.
In 1954 he again sang for Dev Anand in Taxi Driver, the song  "Jayen to jayen kahan" became immortal and one of his greatest hits.
Talat sang approximately 800 songs spread over 4 decades spanning between the 40s and 80s Here I am posting a few of his immortal songs