Ashok Kumar - The most bankable star of the 40s 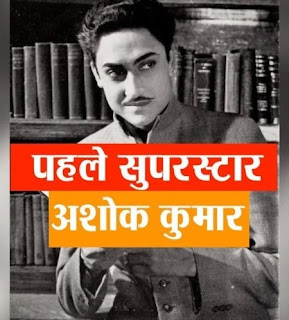 The first film of Ashok Kumar was Jeevan Naiya (1936), a Bombay Talkies production.  It was a sheer fluke that he became an actor. He didn't want to become an actor.  Those days, actors were really looked down upon. They were believed to come from the lowest strata of society. He came to Bombay to become a director. So he joined Bombay Talkies as a technician. he worked in the camera department. Later, he was made a lab assistant. He worked as Lab Assistant for 8 months, suddenly Himanshu Rai, the owner of Bombay Talkies made him the hero of the film Jeevan Naiya replacing the existing hero Najam-ul- Hussain.

Initially, he was not comfortable in acting but later gathered confidence in his second film  Achhut Kanya (1936), where he again paired with Devika Rani became a smash hit established him a great actor. After that, he was a permanent hero of all Bombay Talkies movies In 1943 he played the first anti-hero role in Indian cinema. The film Kismet(1943) was the first super duper hit of Indian cinema, It was the first film that collected more than a crore rupees at Box office. Post Kismet, Ashok Kumar became the most bankable star of the era, delivering a succession of box office successes with movies like Chal Chal Re Naujawan (1944), Shikari (1946), Sajan (1947), Mahal (1949), Sangram (1950) and Samadhi (1950).

, Ashok Kumar has ruled the silver screen and melted millions of hearts with his charismatic screen appearance and personality. He was the first superstar of Hindi cinema as well as the first lead actor to play an anti-hero. He also became the first star to reinvent himself, enjoying a long and hugely successful career as a character actor.

He produced several films for Bombay Talkies during the final years of the company including Ziddi (1948), which established the careers of Dev Anand and Pran, Later on, he quit the Bombay Talkies and started Filmistan Studio with Shashdhar Mukharjee, his desire to return to Bombay Talkies was always there." He re-bought Bombay Talkies in 1947. "Devika Rani had left by then. But the Talkies had fallen on bad days. The debts amounted to Rs 28 lakhs. We made movies like Majboor, Ziddi, Mahal, and Mashal to repay the debts."
With the advent of the 1950s, Ashok Kumar switched over to more mature roles, with the exception of the 1958 classic Howrah Bridge. Despite the arrival of a younger crop of stars like Dev Anand, Dilip Kumar, and Raj Kapoor, Ashok Kumar remained one of the stars of the era with hits like Afsana (1951), Nau Bahar (1952), Parineeta (1953), Bandish (1955) and EK Hi Raasta (1956). His most successful film of that era was Deedar (1951), in which he played second fiddle to Dilip Kumar.
Ashok Kumar played an important role in several landmark movies in the 1960s and 1970s, including Jewel Thief (1967), Aashirwad (1968) (for which he won a Filmfare Award as well as National Award in 1969), Purab aur Pashchim (1970), Pakeezah (1972), Mili (1975), Chhoti Si Baat (1975) and Khoobsurat (1980).
Ashok Kumar's last film role was in the 1997 movie Aankhon Mein Tum Ho.
. Altogether, he starred in over 275 films. He has done more than 30 Bengali dramas in Dhakuria.He was honored in 1988 with the Dadasaheb Phalke Award, the highest national award for cinema artists, by the Government of India and also received the Padma Bhushan in 1999 for his contributions to Indian cinema.
He died at the age of 90 in Mumbai on 10 December 2001 of heart failure at his residence in Chembur. The then Prime Minister Atal Bihari Vajpayee described him as "an inspiration... for many generations of aspiring actors.
If you liked this blog, you would also appreciate my Youtube channel Bollywood Unplugged, the link is given below
https://youtu.be/BFj560iRLJA
Songs from Ashok Kumar's Films
Koi Hamdam Na Raha from Jeewan Naiya 1936
Original Ek Chatur Naar from Jhula 1941
Song from Kismet 1943