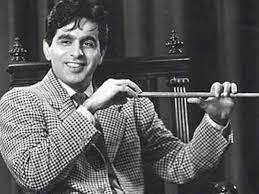 Dilip Kumar was not only one of the earliest superstars of Hindi cinema, but also one of the few legendary artists India has seen. Dilip Kumar's resume contains many of Indian cinema's landmark, genre-defining roles. His performances as the drunken, doomed lover in Devdas and the rebellious royal son in Mughal-e-Azam have been endlessly referenced by his successors on-screen. In Madhumati, he set the trend for reincarnation films. In Ram Aur Shyam, he established the twins-separated-at-birth formula. He became the first-ever winner of the Filmfare Best Actor award for Daag in 1954 and went on to win the award another seven times.

Born as Yusuf Khan in Peshawar on December 11, 1922, it’s said that it was Devika Rani who spotted him at Pune’s military canteen. She told him to come to Mumbai and offered him his first film Jwar Bhata (1944). Since then in 6 decades he appeared in 65 films. His span across a staggering 50 + years, was full of some classics and utterly dedicated performances. He won as many as 8 Filmfare Awards for Best Actor (Daag, Azaad, Devdas, Naya Daur, Kohinoor, Leader, Ram Aur Shyam, Shakti) Let's look into the performance of Dilip Kumar in these films 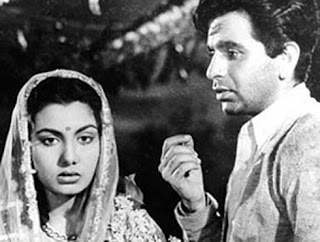 Dilip Kumar won the first-ever Filmfare Award in the Best Actor category for his performance in this film. The Awards were instituted in 1954. The film fared well at the box office and was declared a hit. Dilip Kumar played the character of Shankar . Who was addicted to alcohol? He is attracted to Parvati (Nimmi), who also lives a poor lifestyle. Shankar wanted to marry her but being a drunkard her stepbrother Jagat Narayan refused. In a dramatic turn of events, Jagat Narayan agrees to marry Parvati with Shankar, Shankar quits alcohol and the film finally finishes with a happy ending.
Azaad (1955) 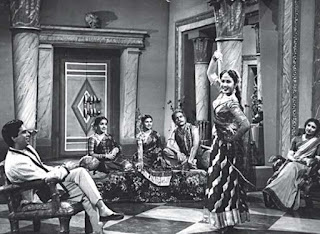 It was the top-grossing Hindi film in the year of its release, and one of the biggest Hindi films hits in the decade. After so many films Dilip Kumar played a light-hearted role and the result was this swashbuckling adventure. The tragic hero was transformed into a Robin Hood character who is also a master of disguises. He uses guile and charm to outwit the villain and woo the heroine played by Meena Kumari who too seemed glad to be out of her three handkerchief roles. 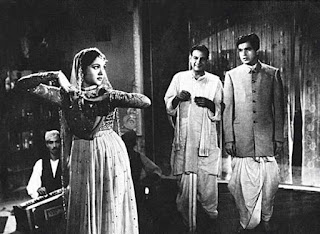 The film had Dilip Kumar in the title role and Vyjayanthimala in her first dramatic role where she played as Chandramukhi, a hooker with a heart of gold and Suchitra Sen in her Bollywood debut as Parvati in the lead. Motilal, Nazir Hussain, Murad, Pratima Devi, Iftekhar and Shivraj were playing other significant roles with Pran and Johnny Walker in extended cameo appearances.
Dilip Kumar played a man driven by unrequited love into being a drunkard to perfection. His eyes are hazy throughout the film and his silences are eloquent. He got so much under the skin of the character that it’s said he had to go to London and consult Harley Street psychiatrists to overcome depression.
Naya Daur 1957 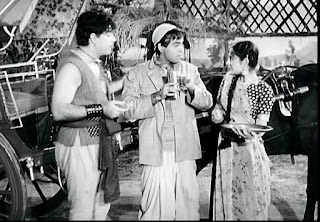 For this film, Dilip Kumar won the Filmfare Award for Best Actor for the third time in a row, being his fourth overall. Man Vs Machine was the theme of this pioneering film which made you question the price of progress. Director BR Chopra’s socialist strand was ever-present in this humanist drama. Dilip played the rustic T to perfection, flirting outrageously with his firebrand heroine Vyjayanthimala. 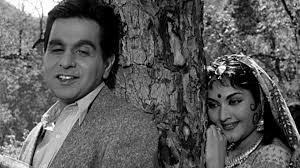 The film stars Dilip Kumar and Vyjayantimala in the lead roles, with Pran and Johnny Walker in supporting roles. The plot focuses on Anand, a modern man who falls in love with a tribal woman named Madhumati. They are unable to have a relationship during their lifetimes and are reincarnated.Excellent performances by both Dilip and Vyjayanthimala. It won nine Filmfare Awards; including Best Film, Best Director, Best Music Director, Best Female Playback Singer, Best Dialogue, Best Art Direction and Best Cinematographer—the most awards for a single film at that time. It also won the National Film Award for Best Feature Film in Hindi. 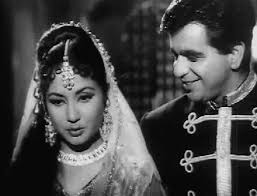 Kohinoor cast Dilip Kumar and Meena Kumari to play a prince and princess of different kingdoms and was full of sword fights, songs and dances. This film is also notable for some rare comical and funny scenes by Meena Kumari, who is otherwise known as the tragedy queen. Its tone was light and it lacked the intense characterizations of their earlier films. It was a major hit of the year.It had great music by Naushad. Gems like Madhuban  Radhika  re (Dilip Kumar reportedly  to play the guitar to lend authenticity to the song) and Do  ka  par hai  regale us even today.
Mughal-e-Azam 1960 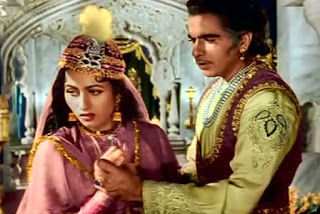 Released on 5 August 1960, it broke box office records in India and became the highest-grossing Bollywood film of all time, a distinction it held for 15 years.Starring Prithviraj Kapoor, Dilip Kumar, Madhubala, and Durga Khote, it follows the love affair between MughalPrince Salim (who went on to become Emperor Jahangir) and Anarkali, a court dancer. Salim's father, Emperor Akbar, disapproves of the relationship, which leads to a war between father and son.
Ganga Jamuna 1961 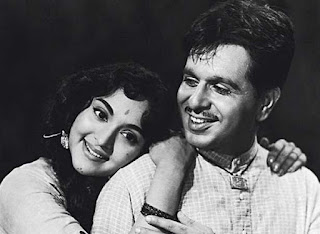 The film stars Dilip Kumar, Nasir Khan and Vyjayanthimala in leading roles, and Azra, Kanhaiyalal, Anwar Hussain, Nazir Hussain and Leela Chitnis in supporting roles.The film features real life brothers Dilip Kumar (Muhammad Yusuf Khan) and Nasir Khan in the title roles.  It was one of the biggest hits of the 1960s and one of the most successful Indian films in terms of box office collection, domestically in India and overseas. Dilip Kumar's performance as Ganga is considered one of the finest acting performances in the history of Indian cinema.
Ram Aur Shyam 1967 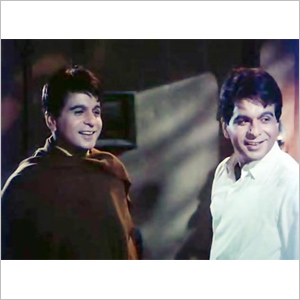 This was perhaps Dilip Kumar’s last big hit as a solo star and what can be more fitting than the fact that he played a double role in the film? It’s to his credit that he was able to infuse two different personalities into the roles. Dilip Kumar’s capability isn’t limited to performing serious roles. He can play a light-hearted or comical character in a commercial film too with equal ease.

If you liked this blog, you would also appreciate my Youtube channel Bollywood Unplugged, the link is given below