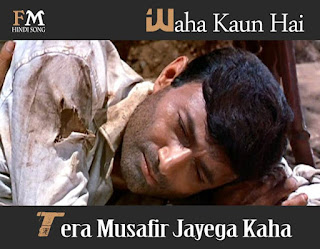 Recall this song from the 1966 film Guide, sung by S D Burman. This was a credit title song in the background as Dev Anand the hero of the film comes out from jail, the song starts right there. The 'Mukhda' starts on a wide shot of the main gate of the jail from inside...'Wahan kaun hai tera, musafir, jaayega kahan'

Vijay Anand, the ace director, and screenplay writer wanted to start the film with a situation and song that would make the audience curious and uneasy, eager to know the story.....He did this with the help of the great Lyricist Shailendra.

If we look into the song minutely we would find the genius of three great people, S D Burman, the composer, Shailendra, the Lyricist, and Vijay Anand, the director. S D Burman composed a tune (actually his old Bangla song, slightly altered) The song starts with a 'Sitaar' notes used in the introduction music..

The sense of freedom is depicted by a strange-looking shot of a tree seen upside down and a group of birds flying away.... The camera moves back to reveal that it was the reflection of the tree in a pool of water....

In the first stanza "Beet gaye din, pyar ke palchhin, sapna bani woh ratein".... "Bhool gaye woh, tu bhi bhulaa de, pyar ki woh mulaaqaatein..." We see Dev Anand walking with a bundle of his belongings slung over his shoulder...The bundle slips and opens.... A close shot of the things that have spilled out... a few photographs of Waheeda Rehman...

The genius of Vijay Anand can be seen in the last shot of the song, we see a sleeping Dev Anand and the shadow of the unknown man as if he is looking at Dev. When the song starts we see Dev Anand smartly dressed with puff hair and as the song ends, he is now lying among the ruins....covered in saffron
If you liked this blog, you would also my Youtube channel, the link is given below
https://youtu.be/BFj560iRLJA