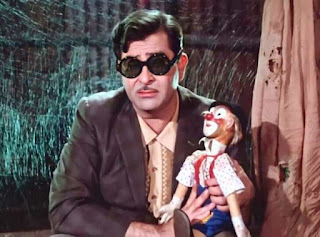 Being a big dreamer doesn’t mean that you walk around with your head in the clouds. It means that you’re seeking a purpose for your life. Raj Kapoor was the person who dreamt big and went after them, At the age of 24, he was a director and a studio owner His first film Aag was released in 1948

As a filmmaker, Raj Kapoor produced 16 films and directed 9 of them under his R.K. banner. Most of his films were successful films and received appreciation from critics and the audience. Mera Naam Joker was his biggest dream project  He made it but the film was a failure at the box office putting Raj Kapoor into a big financial crisis.

He didn't stop dreaming, he came up with an idea to get out of this debt. He released the film 'Bobby' in the year 1973. With this film, he launched his 18-year-old son Rishi Kapoor. This trick proved to be really effective and Bobby proved to be a blockbuster hit of that era. After this, along with Raj Kapoor, the days of the whole family and family went back. The film had Dimple Kapadia in the lead role along with Rishi Kapoor.

He had a dream to make a film Henna, for nearly two decades, the showman carried around Henna as an idea, like a dream. In fact, when Raj Kapoor died in 1987,  only the title, the story, and two songs: chitti and mai der karta nahin hoon, der ho jati hai. were ready

His dream lived on when his sons decided to complete the film and got it released on 28th June 1991. This film for the brothers Kapoor was a tribute to Raj Kapoor. It took them 3 years to fulfill the dream of their father. IT wasn't easy. The Cassandras of the film industry labeled the film a non-starter but the sons had the genes of Raj Kapoor of not backing out.

Raj Kapoor had another film on his wishlist, the title of the film was 'Rishwat' the story was ready and was working on its screenplay. Another dream project was a film on Ajanta caves.

Raj Kapoor had received many awards throughout his career, including 3 National Film Awards, 11 Filmfare Awards and 21 nominations. His films Awaara (1951) and Boot Polish(1954) were nominated for the Palme d'Or at the Cannes Film Festival. His acting in the former was rated as one of the "Top-Ten Performances of all time", by the Time Magazine.His film Jagte Raho (1956) also won the Crystal Globe award at the Karlovy Vary International Film Festival.

If you liked this blog of mine, you would also appreciate my Youtube Channel Bollywood Unplugged, the link of the channel is given below

I am posting some of my Favourite Raj Kapoor's Songs