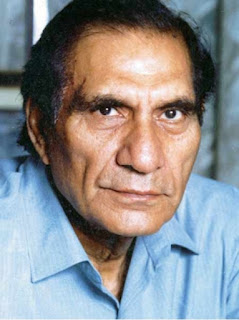 B R Chopra was one of the legendary figures of Bollywood, Bombay's film industry. Whether making musicals or dramatic, socially conscious films he combined quality film-making with an ability to cater to popular taste.The first film he produced flopped, he turned to direction. He persuaded one of the most natural actors of the day, Ashok Kumar, to star in his film Afsana (1951), which was a hit.
In 1955 he founded his own production house, BR Films. His first film under his own banner, Ek hi Raasta, took on the issue of widow remarriage. His later films dealt with subjects such as the after-effects of partition and the rights of Muslim women.He became a champion of making Social Movies. B R Chopra was later became a master of the art of storytelling.Some of his best known films are  Naya Daur (1957), Sadhna (1958), Kanoon (1961), Gumrah (1963), Humraaz (1967), Awam (1987)
Baldev Raj Chopra (22 April 1914 – 5 November 2008) made the great TV Serial Mahabharat which was one of the most successful TV serials in Indian television history.
He directed successful film across genres after 1972, with films like suspense thriller Dhund, comedy film Pati Patni Aur Woh, crime film in Insaaf Ka Tarazu, Muslim social in Nikaah and the political thriller Awam,he also made Dastan in 1972 with Dilip Kumar which was not successful.
He died in Mumbai at the age of 94 on 5 November 2008.He was awarded the Dadasaheb Phalke Award in 1998.
His younger brother Yash Chopra, son Ravi Chopra and nephew Aditya Chopra are also directors in the Bollywood industry.