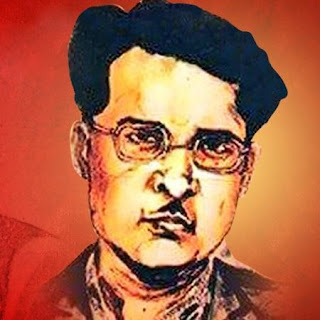 Born in 1913 at Bettiah Bihar, Gopal Singh Nepali was one of the most renowned Hindi poets of all time. His poems evoke patriotism, love for nature and humane values. He also wrote lyrics of a few Hindi films.  His association with Bollywood spanned around two decades, beginning in 1944 and ended with his death in 1963.During the 1962 Indo-China war, Nepali lifted the spirits of Indian citizens and Indian soldiers via his Patriotic Poems and Songs and he went to the border in order to recite them. The patriotic songs and poems include Savan, Kalpana, Neelima, Naveen Kalpana Karo,etc.
In 1944 he was hired by Filmistan for 4 years at the salary of Rs 200 per month.The first film he wrote lyrics was Majdoor. He wrote nearly 400 songs in 60 films.He also gave music for few of his songs.He also made few films Nazrana(1949),Sansani(1951)and Khushbu(1955).
Nakul Singh Nepali, son of Gopal Singh Nepali, has filed a suit at the Bombay High Court against the makers of Slumdog Millionaire, saying that Danny Boyle they wrongly credited poet Surdas for writing the song Darshan Do Ghanashyam. According to the suit, Nepali says his father, a poet, wrote the song.He died on 17 th April 1963 after attending a Kavi Sammelan.