Shakeel Badayuni - The Creator of Immortal Love,Romance and Dejection Songs 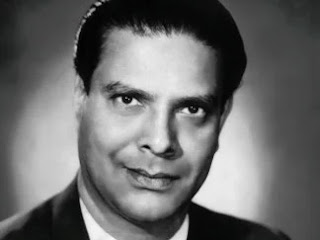 Shakeel was Naushad’s discovery; it was the composer who got the struggling poet a break in Kardar’s Dard, ending days of poverty for young Shakeel’s large family.He used his experiences of deprivation with painful intensity in his early lyrics.
He confined all his creativity to love, romance and dejection, resisting all temptation to write about social causes.
Shakeel reached his zenith as lyricist in Mughal e Azam, with each song a lyrical cosmos in itself, the line ‘pyar kiya toh darna kya’ easily the most popular. Another great creation was penning a bhajan as authentic as ‘Man tarpat Hari darshan ko aaj’ from Baiju Bawra.
As the name suggest Shakeel Badayuni was born at Badayun U P on 3rd August 1916.When he joined Aligarh Muslim University in 1936, he started participating in inter-college, inter-university mushairas and won frequently. After completing his BA, he moved to Delhi as a supply officer, but continued participating in mushairas, earning fame nationwide. He was interested in to write songs for films so he moved to Bombay in 1944 where he was introduced in films as lyricist from the film Dard in 1947.
The songs of Dard proved to be very successful, especially Uma Devi (Tun Tun)'s Afsana Likh Rahi Hoon. Only a few are so lucky that they attain success in their first film, but Shakeel deserved success which started with Dard and continued on over the years. He formed a lasting partnership with Naushad. Together, they would give many hits over the next 25-odd years.
Among the scores they churned out together, are those of Deedar (1951), Baiju Bawra (1952), Mother India (1957), and Mughal-e-Azam (1960), that stand out. Other films they scored together include Dulari (1949), Shabab (1954), Ganga Jamuna (1961), and Mere Mehboob (1963). Although Shakeel Badayuni worked most extensively with Naushad, he also collaborated with Ravi and Hemant Kumar as well. His lyrics for the song Husnwale Tera Jawab Nahin and Ravi's music score both won Filmfare Awards for the hit film Gharana. His other notable film with Ravi is Chaudhvin Ka Chand (1960), while Sahib Bibi Aur Ghulam (1962) is his biggest hit with Hemant Kumar. The title song from Chaudhvin Ka Chand, rendered by Mohammed Rafi, won Badayuni the Filmfare Award for Best Lyricist in 1961.He received 3 Filmfare Awards in 1962 for the song husnwale tera jawab nahin in the film Gharana and in 1963 for the song kahin deep jale kahin dil in the film Bees Saal Baad
Shakeel also wrote a substantial chunk of his songs for music director Ravi Sharma. Prominent amongst those were Gharana (1961), Ghunghat,Grahasti (1963), Nartaki (1963), as well as Phool Aur Patthar and Do Badan.
Shakeel Badayuni succumbed to diabetes complications at the age of fifty-three, died on 20 April 1970, at Bombay Hospital.