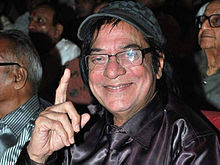 Jagdeep born on 29th March 1939 started as a child artist from B R Chopra's Afsana in 1951. As a child artist h appeared in films like Ab Dilli Door Nahin, K. A. Abbas's Munna, Guru Dutt's Aar Paar, Bimal Roy's Do Bigha Zamin and AVM's Hum Panchi Ek Dal Ke. After Hum Panchi Ek Dal Ke, he received various accolades and high praise for his roles. Pandit Jawahar Lal Nehru has gifted his personal scarf to Jagdeep for his stellar performance in Hum Panchi Ek Daal Ke.
He was launched as a leading man by AVM in the films Bhabhi, Barkha and Bindaya, and went on to do a few more films as a leading man. Many hit songs were picturisation on him as a leading actor.Later he switched to comedy and established himself a com median in many films.Today's generation remembers him as Soon a Bhopal of Sholay and Salman Khan's dad in Andaz Apna Apna (1994).
He is also known for his appearances in many horror movies, especially in projects of the Ramsay Brothers. He appeared in famous hits like Purana Mandir and Saamri.
In this blog I am posting some of the hit songs picturised on him