Manmohan Desai - The Film Maker that Ruled the Box Office 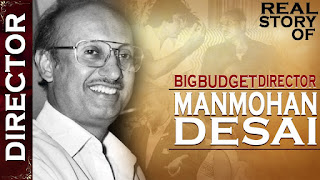 Manmohan Desai, the Ace Director could achieve the impossible with confidence. The man who firmly believed in the “Lost and Found” formula left behind an indelible mark in Bollywood film history, with films that spun magic with great music, top order performances and thoroughly enjoyable storylines that worked even with a touch of incredulity.
He started his career with a love story Chhalia but he is known for the action-packed multi-starrers such as Amar Akbar Anthony, Naseeb, Suhaag, Parvarish, Coolie, Mard, Desh Premee and Dharam Veer.
His association with Amitabh Bachchan became legendary. the duo delivered a string of hits – Amar Akbar Anthony, Parvarish, Suhaag, Naseeb, Desh Premee, Coolie and Mard, with only their last film together Ganga Jamuna Saraswati failing at the box-office.
Out of the 20 films that Desai directed in his career span of 29 years (1960–1989), as many as 13 films were stupendous hits, a remarkable success ratio for an industry where box-office disasters abound despite huge budgets and star casts.
Apart from Bachchan, Manmohan Desai worked with other leading male stars such as Raj Kapoor in the 1960 film Chhalia, Shammi Kapoor in "Bluffmaster" (1963), Rajesh Khanna in Sachaa Jhutha (1970) and Roti (1974), Randhir Kapoor in Raampur Ka Lakshman (1972), Shashi Kapoor in Aa Gale Lag Jaa, Dharmendra in Dharam Veer (1977). 1977 was an exceptional year for him. All four of his films released that year were huge hits: Parvarish, Amar Akbar Anthony, Chacha Bhatija and Dharam Veer.
As an acknowledgement of Desai's goodwill and his box-office supremacy, stars from Raj Kapoor to Rajesh Khanna and Dharmendra made a special appearance in the Desai-directed Naseeb.
Manmohan Desai met his tragic end on March 1st 1994. The man behind megastar Amitabh Bachchan’s career in Bollywood fell to his death from the balcony of his flat when it collapsed. It remains unclear if this was an accident or suicide. Many say he took his life as he could not cope up with failing health and declining career( His last 2 films with Amitabh Bachchan flopped badly).
Beside Hit films he also gave great songs in his films.