Kalyanji Anandji- From the Folk Music to Funky Music 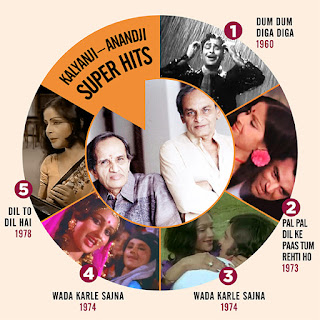 Anandji the younger brother of Kalyanji grew up in an atmosphere rich in culture, stalwarts like V Shantaram and Durga Khote being their neighbours. His introduction to the world of music happened when an 11-year-old Anandji and his classmates were taken to be part of the chorus in Devika Rani’s Meghdoot (1944).
He along with his elder brother Kalyanji started an orchestral group called Kalyanji Virji and Party and held musical shows. They participated in the Sarvajanik Utsav, Navratri and Ganpati celebrations. he’d play the tabla. Kalyanji, who introduced a new electronic instrument called the clavioline. With this instrument, they played the been (the music to entice snakes) for a snake sequence in Nag Panchami (1953), the music of which was scored by Chitragupt. People came to watch the film just to listen to this music,” they earmark their debut in film music.
Hemant Kumar heard their tune and decided to use this in the most popular song "Man Dole Mera Tan Dole" Soon their Nagin tune was being played in Mandirs, Navratri and even Shaadis.
Samrat Chandragupta (1959) was their first film as Kalyanji Virji Shah. Songs like "Chahe Paas Ho" (Lata–Rafi) that are remembered to this day were what made the movie a commercial success. This was followed by his composing music scores for more films like Post Box 999 before Anandji who was assisting him, joined him officially to form the Kalyanji Anandji duo in Satta Bazar and Madari (1959). Chalia (1961) was their earliest major hit. In 1965, two decisive scores, Himalaya Ki God Mein and Jab Jab Phool Khile, established them as composers to reckon with.
Anandji is a multitalented personality. He not only mastered in many musical instruments but also be known for introducing Jaz in Hindi films. He used to do mimicry of many artists of his time. He also knows astrology and face reading.
It was the music of Saraswatichandra (1968) that endorsed the genius of the brothers, more so because the classical tunes came soon after their modern Rhapsody in Haseena Man Jayegi.The songs "Chandan sa badan, Phool tumhe bheja hai, Chod de sari duniya, Hamne apna sab kuch khoya... were instant hits.
Kalyanji-Anandji were dubbed ‘lucky’ for first-timers. They worked with debutant directors including Manmohan Desai (Chalia), Prakash Mehra (Hasina Maan Jayegi), Manoj Kumar (Upkar), Sultan Ahmed (Heera,), Feroz Khan (Apradh), Subhash Ghai (Kalicharan) and Chandra Barot (Don, 1978). They also played mentors to singers like Kumar Sanu, Alka Yagnik, Sadhna Sargam, Sapna Mukherjee and Sunidhi Chauhan. “They gave the name Kumar Sanu to Kedranath Bhattachraya and Sadhana Sargam to Sadhna Ganekar.
Both Kalyanji and Anandji worked as music composers for over 250 films, 17 of which were golden jubilees and 39 silver. They organised many charitable concerts for NGOs and several charitable institutions in India and abroad with some of the biggest names in Bollywood, like Dilip Kumar, Amitabh Bachchan, Anil Kapoor, Vinod Khanna, Rekha and Sridevi.
From composing desi beats for Manoj Kumar the duo hit a contrasting octave when they composed for the ‘Texas cowboy’ Feroz Khan in films right from Apradh, Dharmatma, Qurbani and Jaanbaz till the ’80s. “Ferozji liked a Western and Arabian touch in his songs.
The composers composed some popular songs rendered by Kishore Kumar such as "Jeevan se bhari teri aankhe", "Zindagi ka safar hai ye kaisa Safar", "Pal Pal dilke paas", "Neele Neele Ambar Par" "Zindagi ka safar" from Safar (1970), "O Saathi Re" from Muqaddar Ka Sikandar (1978), "mera jeevan kora kagaz" from Kora Kagaz (1974), Jeevan se bhari teri aankhe " from Safar (1970), "pal pal dil ke paas" from Blackmail (1974), "neele neele ambar par " from Kalakaar(1985), "samzauta gamon se kar lo" from Samjhauta (1973), "apne jeevan ki ulzan ko" from Ulzan (1975).. Their composition called "Pal bharke liye" was used in an episode of The Simpsons. Remixed version of the song "Apni Toh Jaise Taise," originally from the 1981 film Laawaris was used in 2010 Bollywood film Housefull.
They got the following Awards