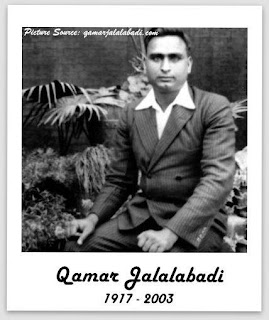 Qamar Jalalabadi (9 March 1917 – 9 January 2003) was born as Om Prakash Bhandari in a Punjabi family in the Jalalabad town near Amritsar. Right from the age of seven he starting writing poetry in Urdu.
He wrote more than 700 songs for nearly 160 films, from 1940 to 1980. Besides songs, he wrote either the script or dialogues of "Shaheed"(1948), “Munimji” (1955), “Phagun” (1958), “Ujala” (1959), “Maya” (1961) and “Taj Mahal” (1963).
His other notable songs include “Ik Dil Ke Tukde Hazaar Hue” (Pyar Ki Jeet, 1948), “Ik Pardesi Mera Dil Le Gaya” (Phagun, 1958), “Mera Naam Chin Chin Chu” (Howrah Bridge, 1958), “Dum Dum Diga Diga” (Chhalia, 1960) and “Main To Ik Khwaab Hoon Is Khwaab Se Tu Pyaar Na Kar” (Himalay Ki God Mein,1965).
He worked with S D Burman in 1946 in the film “Eight Days” where the comic song “O Babu Babu Re” became quite popular. He went on to work with music director Sardar Malik on many films. One of their hits was “Sunti Nahi Duniya” (“Renuka”, 1947).
. In 1942, he wrote lyrics for his first film Zamindar which was a Pancholi Pictures production and the songs of this film were very well received, especially the song sung by Shamshad Begum "Duniya me garibonko aaraam nahi milta", which also had a line or two written by writer and poet Behzad Lucknawi.
As a lyricist, Qamar Jalalabadi was very versatile. On one hand, he wrote mesmeric duets like "sun meri saanwari mujhko kahin tum bhool na jana…" sung by Lata Mangeshkar and Mohd. Rafi (film: Aansoo 1953) and on the other hand he penned comic relief songs like "khush hai zamana aaj pehli tarikh hai" endured with full throttle gusto by Kishore Kumar (film: Pehli Tarikh-1954). This song turned into a veritable anthem and was played on Radio Ceylon on the first of every month for decades, and it probably still is.His brush with comedy was seen next in Aansoo Aur Muskan with, " Guni jano, Bhakt jano…" sung by Kishore Kumar as an actor in the movie.
In his long career span he worked for several Film Companies like; Prabhat Film Company, Pancholi Pictures, Filmistan Ltd., Famous Pictures, Minerva Movietone, Prakash Pictures, Wadia Films Ltd., Filmkar Ltd., Sippy Films, N.C Sippy Films, Shri Shakti Films, Mitra Productions and many more. He composed the title track of the popular television serial Vikram aur Betaal.
He was an acclaimed Adabi Shayar and graced many Urdu recitals all over the nation. Apart from that, he was the founder and member of the Indian Performing Right Society (IPRS) and the Film Writers Association in India.