Amit Kumar,- The Tree that grew under a huge Banyan Tree 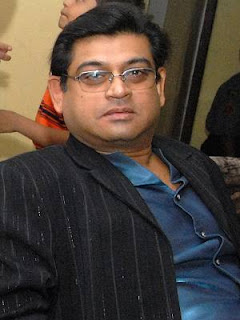 Amit Kumar ( 3rd July 1953),son of the great Kishore Kumar like his father a versatile man.He is a living document of Hindi film music of nearly four decades. He has his own style of singing,he never tried to imitate his father.
With a breezy and refreshing style of his own, Amit could never escape being compared with his father: that's not unusual for any celebrity child. But Amit handled it with élan. He was never intimidated by him. He was an extremely talented musician, but he groomed him. He was the one who taught him how to hold the microphone. He showed him the way;He learnt how to walk much later,Amit remembers warmly. “He was the greatest part of my life. I, as a son who loved him very dearly, studied him closely for 35 years,” he adds. “Under a huge banyan tree, it's a struggle for anything else to grow. I never sounded like my father and I couldn't have. We are two different musical minds.”
Like his father, Amit started singing from an early age and he used to sing at Durga Pooja festivals in Calcutta. At one such function arranged by a Bengali actor named Uttam Kumar, the audience continued requesting encores. While his mother complained that he was singing "filmy" songs, his father decided to bring him to Bombay.
Music Director R D Burman took him the 1976 film Balika Badha, the song"Bade Achchhe Lagte Hain", by which he attained national fame.
His duets with his father, such as "Haseeno Ke Chakkar Mein" from Deewangee in 1976, "Nazar Lage Na Saathiyo" from Des Pardes in 1978 and "Sun Chache Bol" from Badthi Ka Naam Dadhi in 1974 became popular.
He sang in various films, including Aandhi, Aap Ke Deewane, Khatta Meetha, Gol Maal, Des Pardes, Ganga Ki Saugandh, Deewanagi (1976), Duniya Meri Jeb Mein, Parvarish, Humare Tumhare (1979) and Baton Baton Mein. The duets he sang with Lata Mangeshkar and Asha Bhosle became famous in this period.
He was at his peak in the 1980s when he gave many hits. In 1980, Amit Kumar sang "Laila o Laila" for Qurbani. This song was named the sixth most-popular film song of 1980 by Binaca Geetmala.Then Amit sang all the songs for the 1981 film Love Story and won a Filmfare Award for the duet "Yaad Aa Rahi Hai" with Mangeshkar.
He became the voice of Kumar Gaurav in the 1980s and their combination gave many hit songs from films such as Romance (1983), Teri Kasam, Lovers (1983), All-rounder and a telefilm -Janam.
Amit Kumar sang for almost all music directors and actors in the 1980s, and was the second-most preferred male playback singer in Hindi films, after his father Kishore Kumar. Among music directors, Amit Kumar was used maximum by R D Burman from 1975 to 1994 and by Bappi Lahirifrom 1983 to 1995.In fact after the death of R D he lost interest in singing in Bollywood. He withdrew himself from the film industry. Kumar started undertaking more live stage performances in various parts of the world since 1996.
Amit Kumar acted in several films directed by and starring his father, which were Door Gagan Ki Chhaon Mein (1964), Door Ka Raahi (1971), Badhti Ka Naam Dadhi (1974), Shabhash Daddy (1979) and Chalti Ka Naam Zindagi (1982). In 1989, he made his last film appearance in his father's incomplete film Mamta Ki Chhaon Mein, which starred himself, his stepmother Leena Chandavarkar and Rajesh Khanna. After his father's death in 1987, he took over as director and completed the film for release in 1989. In his long career in film he acted in a Bengali film namely "Gayak". In this film the name of his character was Amit and it was of a struggling singer. He sang a number of songs for this film under the direction of Rabin Banerjee.