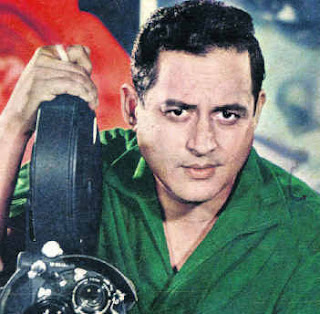 Guru Dutt was a part of the exclusive school of Indian cinema -- the likes of Raj Kapoor, Mehboob Khan and Bimal Roy, which were always a healthy blend of artistic and commercial elements between mid '50s and '60s.
He is most famous for making brilliant lyrical and artistic films within the context of popular Indian cinema of the 1950s, and expanding its commercial conventions, starting with his 1957 masterpiece, Pyaasa. Several of his later works have a cult following. He was one of the pillars of the a Golden Era of Bollywood.
Guru Dutt (9th July 1925) was born Vasanth Kumar Shivashankar Padukone in Bangalore to Shivashankar Rao Padukone and Vasanthi Padukone
Guru Dutt had a tough childhood with financial difficulties, and a strained relationship between his parents.He was a good student, but never went to college, partly because of financial troubles at home. Instead, he joined the performing arts troupe of Uday Shankar.
He joined his parents in Mumbai in 1944. Dutt's uncle found him a job under a three-year contract with the Prabhat Film Company in Pune the same year. It is here that Guru Dutt met two people who would remain his good friends -- actors Rehman and Dev Anand.y
Guru Dutt acted in a small role as Sri Krishna in Chand in 1944. In 1945, he acted as well as assisted director Vishram Bedekar in Lakhrani, and in 1946 he worked as an assistant director and choreographed dances for P.L. Santoshi's film, Hum Ek Hain.

Guru Dutt developed a flair for writing in English, and wrote short stories for The Illustrated Weekly of India, a local weekly English magazine.
It is during this time that he is supposed to have written the script for the almost autobiographical Pyaasa.
After Prabhat failed in 1947, Dutt moved to Bombay, where he worked with two leading directors of the time, with Amiya Chakravarty in Girl's School, and with Gyan Mukherjee in the Bombay Talkies film Sangram. Then, Dev Anand offered him a job as a director in his new company, Navketan, after the first movie had flopped.
Thus, Guru Dutt's first film, Navketan's Baazi, was released in 1951.
He made the quintessential 1950-'60s classics such as Kaagaz Ke Phool, Pyaasa, Sahib Biwi Aur Ghulam and Chaudhvi Ka Chaand.
His movies go full house when re-released; especially in Germany, France and Japan. Today, no world cinema class is complete without inclusion of Guru Dutt. Pyaasa was rated as one of the best 100 films of all time by the Time Magazine.
Dutt's Kaagaz Ke Phool (1959) was an intense disappointment. He had invested a great deal of love, money, and energy in this film, which was a self-absorbed tale of a famous director (played by Guru Dutt) who falls in love with an actress (played by Waheeda Rehman, Dutt's real-life love interest). Kaagaz Ke Phool failed at the box office and Dutt was devastated. Though he produced 2 films after that Chaudhvi Ka Chand and Sahib Bibi Aur Ghulam, both the films recovered his loses but he never recovered from his mental state.he was not on good terms with his wife, Geeta Dutt; Waheeda Rehman had distanced with him. There was sleeping trouble that had him taking sleeping aid, and he was drinking since 5 pm that evening. Suicide or a lethal dose -- it was a loss to Indian cinema industry?
On October 10, 1964, Guru Dutt was found dead in his bed in his rented apartment at Pedder Road in Bombay. He is said to have been mixing alcohol and sleeping pills. His death may have been suicide, or just an accidental overdose.