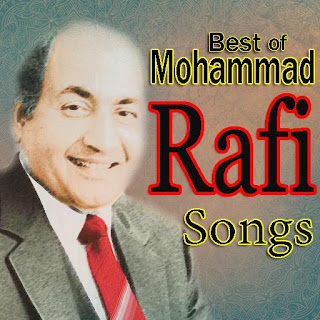 If the name Mohammed Rafi could be translated into many choice words it would look like this: Genius, Godly, Angel, Perfection, Humanity, decency, a way of life!
Rafi is great, Rafi is so wonderful, Rafi is the best there is, there is no one like him, Everyone must bow to Rafi & call him the greatest and say they are nothing without him etc etc"
Rafi was born on 24 December 1924 to a working-class family in rural Punjab near Amritsar. He began with singing for radio stations. During the formative years of his career in the 1940s, he lent his voices to All India Radio as well as to Hindi film industry in Bombay.
His journey to becoming an evergreen voice of Bollywood was not that smooth, rather rocky due to a fair amount of competition among the talents in the film industry.
Shyam Sunder  provided the opportunity to Rafi to sing a duet with G. M. Durrani, "Aji dil ho kaabu mein to dildar ki aisi taisi...," for Gaon Ki Gori, which became Rafi's first recorded song in a Hindi film.
He sang a number of songs for Naushad as part of the chorus, including "Mere Sapnon Ki Rani, Roohi Roohi" with K. L. Saigal, from the film Shahjahan (1946).
In 1948, after the assassination of Mahatma Gandhi, the team of Husanlal Bhagatram-Rajendra Krishan-Rafi had overnight created the song "Suno Suno Ae Duniyawalon, Bapuji Ki Amar Kahani". He was invited by the Indian Prime Minister, Jawaharlal Nehru, to sing at his house.
His association with Naushad helped to establish himself as one of the most prominent playback singers in Hindi cinema. Songs from Baiju Bawra (1952) like "O duniya ke rakhwale" and "Man tarpat hari darshan ko aaj" furthered Rafi's credentials.Rafi ended up singing a total of 149 songs (81 of them solo) for Naushad. Before Rafi, Naushad's favourite singer was Talat Mahmood.
. Naushad, the doyen of Hindi classical music, who had the knack of drawing the purity of a raga with an aesthete's Midas' touch, used only Rafi's voice for his composition throughout his distinguished career. He combined classical and popular music and produced a new genre for which Rafi gave the soul through his mellifluous voice.
He became the voice of  Dilip Kumar,the combination of Naushad ,Shakeel Badayuni, Dilip Kumar and Rafi gave us many immortal songs. His silken voice made Rajendra Kumar a jubilee star and imparted to Shammi Kapoor, his sui generis style. He sang for Johnny Walker in his unique thin voice.
S.D. Burman used Rafi as a singing voice of Dev Anand and Guru Dutt. Rafi worked with Burman in 37 films, including Pyaasa (1957), Kaagaz Ke Phool (1959), Kala Bazar, Nau Do Gyaran, Kala Pani , Tere Ghar Ke Samne (1963), Guide (1965), Aradhana (1969), and Abhimaan(1973).
His aability to depict every mood through his songs speaks volumes about the diversity of talent. Tasveer banata hoon teri khoon-e-jigar se from Diwana spelt class, while Phir wo bhuli si yaad aayi hai showcased Rafi’s vocal virtuosity. Over five decade have passed since these songs were recorded and yet none of his songs have lost their appeal.
In his songs like Main zindagi ka saath nibhata chala gaya, Rafi tried to inspire the dejected and give hope to those who had lost faith in life and God. On July 31, 1980, a massive heart attack silenced this peerless singer forever. But his songs keep him alive.