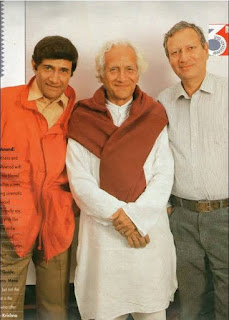 The eldest of three brothers in the Hindi film industry (the younger ones being Dev and Vijay), Chetan Anand graduated in English from Lahore’s Government Law College. He worked with the British Broadcasting Corporation in the United Kingdom, and also taught at Doon School in Dehradun before moving to Mumbai in the 1940s with a script for a biographical movie on emperor Ashoka. While the film didn’t take off,but he was given the lead role in a film by Phani Mazumdar Rajkumar in 1944.
Unfortunately this film never released. Both of his attempt did not see the light of the day.
Anand then got involved with the Indian People’s Theatre Association writing plays for them,here too he did not get success. He was later offered to direct a film written by K A Abbas and produced by Rashid Anwar.
One of the most underrated films of its time, Neecha Nagar never saw the light of the day in our own country. Ironically, this film was never released in the country but it went on to win the top honor at Cannes.
After this film he was not offered any film,he wasj jobless for few years.In the mean time his younger brother Dev Anand established himself as an actor with the hit film Ziddi in 1948.
Seeing his elder brother depressed Dev Anand decided to start their own film company.Afsar, starring Dev Anand and Suraiya, was the first film made by Navketan, which turned out to be a moderate success. It was followed by Taxi Driver and Andhiyan, both of which he directed for the Navketan banner.
After this film he directed Andhiyan  with Dev Anand which was again a flop.it was in 1954 when he got success as a director with the release of Taxi Driver.
While he made his reputation as a director, Chetan Anand kept on acting too occasionally. He appeared in Humsafar made in 1957. In 1957 he directed two movies Arpan and Anjali, in which he played lead roles too. He went on to act in Kala Bazar, Kinare-Kinare, Aman, Kanch Aur Heera and Hindustan Ki Kasam, which he directed too.
In 1957 he directed two movies Arpan and Anjali outside of Navketan but both the films flopped.once again he could not get any film till he got Kinare-Kinare Kinare-Kinare in 1963.
Later on Chetan Anand started his own production banner called Himalaya films and teamed up with photographer Jal Mistry, music director Madan Mohan, lyrics writer Kaifi Azmi and actress Priya Rajvansh. Together they gave some of most memorable and unique films in Hindi cinema like Haqeeqat, Heer Raanjha, Hanste Zakhm, and Hindustan Ki Kasam.
Chetan Anand remained an underrated director though he gave some of the great films .He died on 6 July 1997, at the age of 76 in Mumbai.