Rekha - A Rare Blend of Beauty and Talent 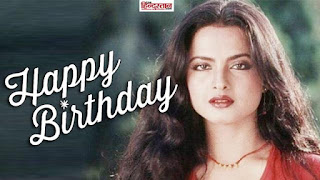 Almost completing 50 years in Bollywood, Rekha when came to Bollywood, was 16years old,  a dusky, obese with a 33-inch waist. No one that time could believe that one day she will become a glamour icon of Bollywood.
On the premiere of Sawan Bhadon in 1970,  Shashi Kapoor uttered in disbelief, "How is this dark, plump and gauche actress ever going to make it?" But as the film released to the public, she became a hit and called the Sex Bomb. Sawan Bhadon was released in 1970 and celebrated a jubilee run in 34 centers across the country including Chennai. And Rekha signed 18 films in a week.
She appeared in several commercially successful films at the time, including Rampur Ka Lakshman (1972) opposite Randhir  Kapoor, Kahani Kismat Ki (1973) opposite Dharmendra, Namak Haram opposite Rajesh Khanna and Pran Jaye Par Vachan Na Jaye (1974) opposite Sunil Dutt, yet she was not regarded for her acting abilities.
Rekha ( Born on10th Oct 1954) appeared as a child (credited as Baby Bhanurekha) in the Telugu film Rangula Ratnam (1966)..Her first signed Hindi film was Anjana Safar. but Sawan Bhadon released first. Despite the success of the film, she was often scorned for her looks. She subsequently got several offers but nothing of substance, as her roles were mostly just of a glamour girl.
Rekha recalls that the way she was perceived at that time motivated her to change her appearance and improve her choice of roles: "I was called the ‘Ugly Duckling’ of Hindi films because of my dark complexion and South Indian features. I used to feel deeply hurt when people compared me with the leading heroines of the time and said I was no match for them. I was determined to make it big on sheer merit.
It was in 1974 Rekha began her lifelong obsession with her mirror. Slowly picking up the tricks of make-up, she lost weight and became svelte Rekha got a meaty role for the first time in Dulal Guha's Do Anjaane (1976), her first film opposite Amitabh Bachchan. She made people sit up with her performance as an ambitious wife who sacrifices love at the altar of ambition. The audience was floored when there was a swift change in her screen personality, as well as her style of acting.
In 1978, with her portrayal of a rape victim in the movie Ghar. a turning point came in her career. The film was considered her first notable milestone, and her performance was applauded by both critics and cine-goers. She received her first nomination for Best Actress at the Filmfare Awards.
In that same year, she attained fame with Muqaddar Ka Sikandar, in which she co-starred once again with Amitabh Bachchan. The movie was the biggest hit of that year, as well as one of the biggest hits of the decade, and Rekha was set as one of the most successful actresses of these times.
In 1980, Rekha appeared in the comedy Khubsoorat, directed by Hrishikesh Mukherjee, with whom she had developed a strong father-daughter bond during their previous collaborations. In a role written especially for her, she won her first Best Actress award. for this film.
In 1981, she starred in Umrao Jaan, Her portrayal is considered to be one of her career-best performances, and she was awarded the National Film Award for Best Actress for it. Now Rekha was no loger a glamourous item but was being approached for challenging roles.
Rekha starred in Ramesh Talwar's family drama Baseraa, which saw her playing a woman who marries her sister's husband after the latter loses her mental balance. She appeared as Sadhna in the commercially successful Ek Hi Bhool (1981), opposite Jeetendra, playing the role of a betrayed wife who leaves her husband. In 1982, she received another Filmfare nomination for Jeevan Dhaara, in which she played a young unmarried woman who is the sole breadwinner of her extended family. In 1983, she took the supporting role of a lawyer in Mujhe Insaaf Chahiye, garnering another Filmfare nomination in the Supporting Actress category.
Shyam Benegal took her in Kalyug (1981), Govind Nihalani's in Vijeta (1982), Girish Karnad's Utsav (1984) and Gulzar's Ijaazat (1987), were few of her films where her performance was appreciated. Apart from parallel cinema, Rekha took on other increasingly serious, even adventurous roles; she was among the early actresses to play lead roles in heroine-oriented films, one such film being Khoon Bhari Maang in 1988. She won her second Filmfare Award for her performance in the film.
In the 90s most of the actresses of her generation, like Hema Malini and Raakhee, who succumbed to playing character parts, typically of mothers and aunts, Rekha was still playing leading roles at a time when younger female stars rose to fame. Rekha retained success with her starring role as Namrata Singh, a young woman who joins the police force to avenge her husband's death in K. C. Bokadia's Phool Bane Angaray (1991). The film was a box-office hit and Rekha received a Best Actress nomination at Filmfare for her work.
In 1996 she did,  her first negative role as Madam Maya, a vicious gangster woman running a secret business of illegal wrestling matches in the US, who, during the course of the film, romances the much younger Akshay Kumar. Her portrayal earned her several awards, including the Filmfare Award for Best Supporting Actress and the Star Screen Award for Best Villain in Khiladiyon Ka Khiladi.
In the 2000s, Rekha appeared in relatively few movies. In Rakesh Roshan's science-fiction film Koi... Mil Gaya, Rekha played Sonia Mehra, a single mother to a developmentally disabled young man, played by Hrithik Roshan. The movie was a financial and critical success and became the most popular film of the year; Rekha received another Best Supporting Actress nomination at the Filmfare for her performance,
From the giggling village belle in Saawan Bhadon to one of the country's reigning actresses, Rekha has come a long way. A  Well, known critic Omar Qureshi once said, "the term diva (in India) was coined for Rekha".