Journey of a Song from Karbala to Guide,Immortalised by Dada Burman 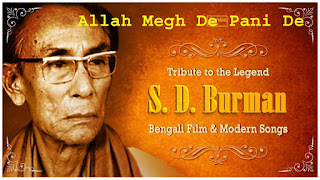 This immortal song " Allah Megh De Pani De" is one of the two songs sung by S D Burman in the 1965 film Guide. This song was adopted by Burman Da from a Bengali folk singer Abbasuddin Ahmed's song, who taught him his signature technique of “voice breaking”.
After Ahmed, several singers have performed this number. Laxmikant-Pyarelal created another version of ‘Allah Megh De’ in the film Palkon Ki Chhaon Mein (1977) with singers Kishore Kumar and Asha Bhosle. Music director Bappi Lahiri rejigged it in Amaanat (1994) and his disco song ‘De De Pyar De’ (Sharaabi, 1984) is also a variation of the tune. Singers Shafqat Amanat Ali and Shubha Mudgal sang a peppy version for composer Debojyoti Mishra in Ramchand Pakistani (2008) but it is the Burman’s version that is best remembered, most likely because he remained true to the original.
This song had a long journey from Bengal to Mumbai, and finally to Pakistan. This song is a Bengali folk genre Jaari Gaan. The name Jaari is most probably taken from the Persian word "Zari" Most Jaari Gaan was based on the Islamic legend of the Battle of Karbala, In medieval Bengal, this genre of folk songs was performed by mostly Sunni Muslims. The followers of Husayn ibn Ali during the battle of Karbala. They used to cry out to God to send them rain-bearing clouds, or megh.
In this blog, I am posting  various versions of this song