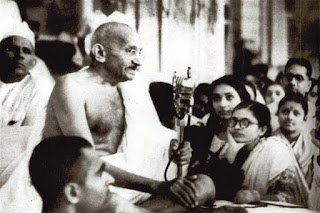 Very few people know that Gandhi was extremely fond of music and arts. Most of us have been all along under the impression that he was against all arts such as music. In fact, he was a great lover of music, though his philosophy of music was different. In his own words -“Music does not proceed from the throat alone. There is the music of the mind, of the senses and of the heart.
Mahatma  Gandhi believed in the power of Music. He used music to bring people together. According to Mahatma "In true music, there is no place for communal differences and hostility. Music was a great example of national integration because only there we see Hindu and Muslim musicians sitting together and partaking in musical concerts. We all think that Tulsidas’s Raghupati Raghav Raja Ram was his favorite Bhajan but "Vaishnava Jana Toh, Taine Kahiye/ Peed Parayi Jaane Re" was his most favorite hymn.
This Bhajan was written by Narsi Mehta, a 15th-century poet-saint of Gujarat. Veteran Film Maker Vijay Bhatt first met Gandhiji in the late 1930s on a trip to Valsad with his friends. When Gandhiji learned that he was a filmmaker, he asked, “Why don’t you make a film on Narsi Mehta?”. He made the film in Hindi and Gujarati and released in 1940. The film was well-received and celebrated silver jubilee across India. Bhatt felt bad that he couldn’t show it to Gandhiji.
Another favourite hymn of the Mahatma was Meerabai’s Hari tum haro, an ode to Lord Krishna. He found universal connotations in Meera’s pain. He was keen that the song be recorded by the Carnatic legend MS Subbulakshmi. After he had moved to Delhi, a 31-year-old MS had come to visit Gandhi. When the Ramdhun began, he told her “Subbulakshmi tum gao, tum shuru karo…’
The song was recorded at All India Radio (AIR) studios in Chennai, on the night of October 1, 1947, and completed at 2 am on October 2. The recording was airlifted to Delhi, where it was played to Gandhi on his 78th birthday, October 2, 1947.
There was an article written by Dr. Namrata Mishra who is Sr. Asst. Prof of Vocal Music, R.C.A. Girls P. G. College, Mathura, U.P.. She wrote that Someone once asked the Mahatma“Mahatmaji don’t you have any liking for music?”. Gandhi replied, “If there was no music and no laughter in me, I would have died of this crushing burden of my work.”
In her article, she says that when Gandhi Ji was in South Africa he had started evening prayers in the Ashram. That collection of bhajans was published under the name - 'Nitivam Kavyo'. In Satyagraha Ashram, Sabarmati, he had added “Raamdhun” as the daily prayer. The musicians of the Ashram were Pt. N. M. Khare, Mama Fadke, Sri Vinoba, and Balkoba Bhave, etc., who were great Indian classical musicians. In his ashram Bhajnawali, there were no discriminations of religion, caste, creed, region, languages etc. It was like a beautiful bouquet of flowers of variegated colours, having various fragrances, and separate features - all in the same bouquet of love, humanity, and faith. 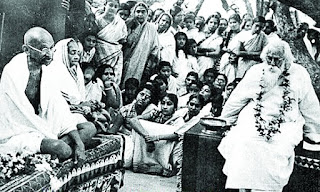 Gandhi Ji not only liked Indian Classical but also western music, in fact, once he wrote a letter to Ravindranath Tagore, written on December 22, 1945, he had suggested in that latter to give both Hindustani music as well as Western music their due place at Shantiniketan along with Bengali music ..
How many of us know that Gandhi ji knew to play the Violin. In his autobiography, he says, "I started to learn to play the violin so that I could get a sense of the notes and beats. Three pounds went into the purchase of a violin and some more to its learning."  when I was returning back I took my violin to my violin teacher. She was most understanding. She said she would try to sell the violin for whatever value it fetched."
In the winter of 1931, on his way back from the Second Round Table Conference in London, Gandhi stopped in Villeneuve de Chillon to call on the philosopher and musical savant, Romain Rolland. The aesthete has written, "...after the prayers, Gandhi asked me to play him a little of Beethoven. I played him the Andante of the Fifth Symphony.
.
Vaishnav jan to tene kahiye by various Artists