Shammi Kapoor- A tough Competitor of Dev Anand in the 60s 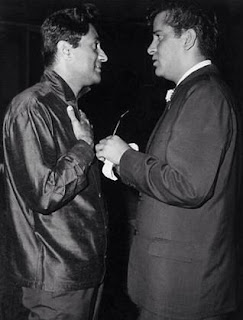 Shammi Kapoor (21 October 1931 – 14 August 2011) became a star with the release of Tumsa Nahin Dekha in 1957. After Junglee was released in 1961, he was giving one hit after another, he became the most sought-after hero along with Dev Anand. There was a tough competition with Dev Anand's films.
Dev Anand once said that the Sixties was the decade when I faced the true competition from Shammi Kapoor. My Jab Pyar Kissi Se Hota Hai had a silver jubilee run, while his Junglee completed its golden jubilee. Similarly, my Hum Dono and his Professor ran to silver jubilees within a span of a few months. The releases of our films were eagerly awaited and seen many times by our fans throughout the nation.
There was a time when Shammi Kapoor was not accepted as a hero. He had about 18 failures against his illustrious surname before writer-director Nasir Husain’s Tumsa Nahin Dekha (1957) catapulted him into fame and stardom. Shammi Kapoor.
Shammi Kapoor in a program on TV once said that he owes his stardom to Dev Anand, had he accepted the do the film Tumsa Nahin Dekha which, Nasir Hussain wanted to make him the hero, he would not be here where he is today. Same way Junglee was offered to Dev Anand which again Dev Saab refused to do so the film came to him. Subodh Mukerji’s tentatively titled film Mr. Hitler, the name later changed to Junglee.
Similarly, in the case of Teesri Manzil, Dev Anand was the first choice of Nasir Hussain but there cropped up some controversy between Dev Saab and Nasir Hussain, the film went to Shammi Kapoor again. Dev Anand once admitted to Rauf Ahmed in an interview, 'I created my biggest rival. With every film I let go, he [Shammi Kapoor] shot to fame but Dev Anand never had any animosity with Shammi Kapoor. In fact after the demise of Shammi Kapoor in an interview, Dev Saab said that we shared a warm rapport, and I must confess that he was the right choice for Teesri Manzil, far better than me.
Both had some similarities, both played the urban hero. both banked upon their songs, both had a  flair for music and had a unique style.
On working together Dev Anand said that both of us were to have starred in Shakti Samanta's One Night To Murder which never went on the floors. Shammi was kind enough to appear in a cameo as a judge in my film Censor.
How did you like my Blog? If liked this please also visit my YouTube Channel . The Link is given below, please click and watch all my videos . There is a request for subscribing to the channel. Kindly click the red button below the video and also click the bell so that you will see my latest videos
1954 in Indian Cinema