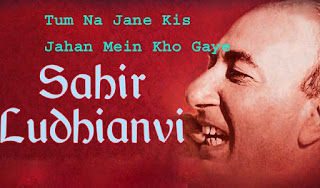 Sahir(March 8th, 1921- 25th Oct 1980) made his debut as a lyricist with the film "Azadi Ki Raah Par" in 1948. The film had four songs written by him. His first song was "Badal Rahie Hai Zindagi". However, it was the year 1951 that would bring him fame and recognition. That year 3 of his films released having the music of S D Burman in all of these three films,
Three of his songs that sky-rocketed in popularity and are hummed even today. First was "Thandi Hawaayen Lehraa Ke Aayi" from Naujawan. The second was from a landmark film  Baazi."Tadbeer Se Bigdi Hui Taqdeer Bana Le" and the third was"Tum Na Jane Kis Jahan Mein Kho Gaye" from Sazaa.
This was followed by the chartbuster Yeh Raat Yeh Chandni Phir Kahan from Jaal(1952), Sahir took film lyrics to the heights of genuine poetry. Now his pairing with S D Burman was to create many immortal sings. Both of them worked together in 18 films. While 1957 saw the end of Sahir’s partnership with SD Burman.,
Sahir’s mastery over the Urdu language, immaculate diction, intensity of feelings and emotions and enchanting style of expression made him a lyricist of a different kind — a class apart. In Guru Dutt’s Pyasa, his songs Yeh duniya agar mil bhee jaye to kya hai, Jinhen naaz hai Hind par woh kahan hain, Jane woh kaise log thhey jinke pyar ko pyar mila won him acclaim.

After S D Burman, his pairing with O P Nayyar and Ravi also created many immortal songs. It was the songs of Naya Daur and Tumsa Nahin Dekha established the pairing with O P Nayyar and with Ravi from the 1963 film Gumrah.
Sahir did work with other composers including, Roshan, Khayyam, and N Dutta, their collaboration produced the score for Milaap (1955), Chandrakanta (1956), Saadhna (1958), Dhool Ka Phool (1959).
In 1958, Sahir wrote the lyrics for Ramesh Saigal's film Phir Subah Hogi, its music was given by Khayyam. The song Woh Subah Kabhi Toh Aayegi with its minimal background music remains popular.  Khayyam collaborated with Sahir in many films including Kabhie Kabhie and Trishul.From about 1950 until his death( 25 October 1980), .Sahir Ludhianvi wrote songs for a total of 122 movies from 1948 up to his death including three unreleased movies, one Punjabi movie and two Pakistani movies. Six movies with his songs were released posthumously. The 50s and 60s were Sahir's most prolific years. He wrote songs for 84 films during these two decades.