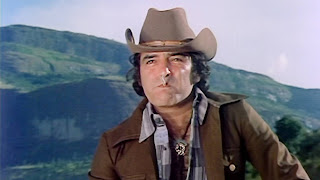 Feroz Khan (25 September 1939 – 27 April 2009), his father belonged to Tanoli tribe from Ghazni of Afghanistan, He was born and brought up in Bangalore. He moved to Bombay to work in films.
He is one of the few actors, who flaunted his surname, those days changing names or no surname was very common and mandatory to stardom.
Right from the first film, he kept his real name, he is the original Khan. Though Dilip Kumar is also a Khan he too changed his name to get stardom in the Bollywood.
He made his debut as a second lead in Didi in 1960. Through the 1960s, he appeared in mediocre films opposite starlets in fantastical dramas, including Reporter Raju (Chitra), Samson (Ameeta), Ek Sapera Ek Lutera (Kum Kum) and Char Darvesh (Saeeda Khan). In the Guru Dutt-Mala Sinha starrer Bahurani, he played the baddie.
In his role as the wayward younger brother of Raj Kumar, he was noticed in the black and white  film Oonche Log (1965), He then played the second lead to Rajendra Kumar in Ramanand Sagar’s Arzoo, to Sunil Dutt in the thriller Pyasi Shaam, It was BR Chopra’s Aadmi Aur Insaan towards the end of the decade, in 1969, where he came into his own. It won him the Filmfare Best Supporting Actor Award.
In 1970 released Safar, in this film the Hero was Rajesh Khanna but Feroz Khan played an important role in this film. In 1971 he appeared in 2 films as the 2nd lead to his younger brother Sanjay Khan( Mela and Upasana).
To improve his career opportunities as a leading man he started his own Production Company. He became a successful producer and director with the 1972 film Apradh, Mumtaaz was his co-star in this film. Apradh was the first Indian movie showing auto racing in Germany, it was a moderate success at the box office. After that, he produced, directed, and starred in the 1975 film Dharmatma, which was the first Indian film to be shot in Afghanistan and was also his first blockbuster hit as a producer, director, and star and marked the appearance of actress Hema Malini in a glamorous avatar. This movie was inspired by the Hollywood film The Godfather.
Throughout the late 1970s and 1980s, he was a leading Bollywood star, directing and starring in many of his films. The 1980 film Qurbani, with Zeenat Aman, was the biggest hit of his career and launched the singing career of iconic Pakistani pop singer Nazia Hassan, with her memorable track "Aap Jaisa Koi". In 1986, he directed and starred in Janbaaz, a box office hit, In 1988, he directed and starred in Dayavan, which was a remake of an Indian Tamil film titled Nayakan. After directing and starring in Yalgaar (1992),He launched his son Fardeen Khan's career with the 1998 film Prem Aggan, which, however, was a box office bomb.  he took a long break from acting for 11 years.
He appeared in over 51 films in the 1960s, 1970s and 1980s, and became one of Bollywood's popular style icons His last film as an actor was "Welcome" was a roaring hit in 2007. He died from lung cancer on 27 April 2009 at the age of 69.
In this blog, I am posting some of his forgotten & rare songs