The Bollywood Songs around Sea Shore 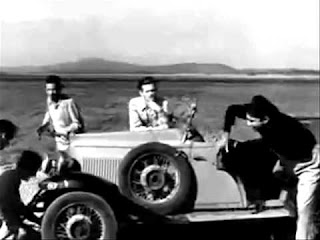 In the 40s and 50s, most of the films were shot at the studios. The trend of outdoor shooting began from the 1954 film Taxi Driver. Recall the song "Jayen To Jayen Kahan" it was shot on a beach. This brought a more realistic approach to the picturization.  The waves sticking the rocks, making a huge splash have been metaphorically used as an emotional explosion.
On the other hand, slow and peaceful waves, are shown to have calming influence.
A seashore song creates a completely different mood or expression. In the 60s the beach or the seashore made its appearance in romantic songs, picnic songs, for obvious reasons. There are many songs, where a family is enjoying happily and denotes the delightful moments of their life.
One of the earliest songs, shot by the seashore. Of course, only long shots and the sea waves are in the song, that is shot on an outdoor location. The close-ups of the actor, Nisar Khan, must have been shot indoors. The conflict and the deep anguish of the character are shown very effectively with the waves hitting the rocks. The orchestration during these scenes also intensifies the tension in the song."Roun Mein Sagar Ke Kinare by C H Atma

A Talat song from ” Taxi Driver, pleasant picturization of sea against the sad mood of the song

The calm sea with soft waves makes the way for a sad song situation. In the 1957 fi[m Samundar, the heroine Bina Rai sings a sad song sitting on a seashore
Song of SAMUNDAR,1957.

. This song opens on a seashore, but later other locations near a beach, also make their appearance, only to end the song on the beach with sunset. The song is from 1958 film Mujrim

The tidal waves crashing on the rocks, scattering the water droplets is a delightful sight to watch. Recall the song "Sach Hue Sapne Tere" from Kala Bazar here Dev Anand in a sad mood sitting on the rock while Waheeda, in a simple saree, without any jewelry at all, with a simple hairdo trying to please Dev, as she does ‘chiki chiki chik chak’. Her encouraging gestures finally appear to work for him, who finally smiles at her.

A Trend of Picnic or Happy songs on the beach started from this 1960 film Dil Apna Aur Preet Parai Here Meena Kumari seen singing with her friends.

Another sad song picturized on Dev Anand in the 1963 film Kinare Kinare where he is walking on a beach with calm sea.

Another hit song by the seashore is from the 1965 film Gumnam, The sea is calm with soft waves. The rocks, the sand, the umbrella with other accessories complete the picture of a perfect picnic by the seaside. Picturized on Helen
.
Song of Gumnam  1965

Here’s a somewhat different Seashore song. Not a serene beach, but rocks with the sea beating against them. This is creating a different mood for this song picturized on Dilip Kumar

Picturized on Juhu Beach, this song was shot on Rajesh Khanna. The beach with sea waves slowly folding on the shore. Nothing more to say!

One of the popular songs of Laxmikant Pyarelal, that is still remembered for its violin tune, the beach it’s an emotional song with the touchy notes of a violin.

In 1981 this song was a great hit, The beach appears to be from a South Indian region. Long Beach, luscious green plantations in the vicinity and big rocks. The song is picturized on Kamal Hasan and Rati Agnihotri from the film Ek Duje Ke Liye

Sagar was the 1985 film, the film was picturized near the sea. The seashore formed an important part of the story and was there throughout the film. The fisherman’s boats, fishing nets, the rocky seashore, and sea waves. This romantic song was shot at the beach.

This one of the great seashore songs At the start of the song Urmila Matondkar is seen running on the beach. The song was shot in foreign locations and captures the picturesque places, a beautiful sunset, and the greenery around the beach.

We see a very attractive seashore, with a soothing sea and whitish sand. The sea waves are delicate and suit the romantic song.