The Story Behind the Song" Lag Ja Gale" 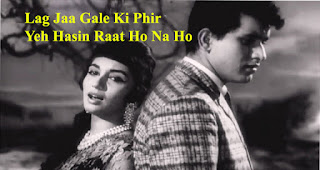 This iconic song from the 1964 film "Woh Kaun Thi" was almost not recorded. Madan Mohan had composed the song with great care for a haunting romantic situation in the film but the  Director of the film Raj Khosla didn't like the tune, so he rejected it.
Madan Mohan, who was very sure that this song could be one of his immortal songs approached Manoj Kumar, the hero of the film to request Raj Khosla to listen to the tune once again. Manoj Kumar Kumar, who appreciated the tune too felt that this could be a memorable song.
When the second time this tune was played, Raj Khosla got bowled over by the composition. He immediately approved it. He wondered, how could he reject this song.
This song was written by Raja Mehdi Ali Khan sung by Lata Mangeshkar was recorded in 1963. When the film released, this song was not as popular as today. You would be surprised to note that this song was not among the top 32 songs of the 1964 Binaca Geet Mala final. Two other songs(Naina Barse and. Jo Hamne Daastan )of this film were on that list, not this one.
There are many songs who are liked and become popular with the passing of time. This song is one such exceptional and inimitable. This song remains one of the favorite songs of Lata Mangeshkar.
The song has not only stood the test of time but has time and again been used by Bollywood and other to accentuate an emotional note in several films, in 1966 the tune of this song was kept in a Tamil film Yaar Nee, a remake of Woh Kaun This, this song was picturized on Jatyalalitha sung by Sushila.In the same year the Telugu movie Aame Evaru, it is rendered as "Andala ee reyi". Even contemporary ones like Karan Johar’s Ae Dil Hai Mushkil to the new Saheb Biwi Aur Gangster 3.this song is used, sung by different singers, the tune remains the same.
There are many versions of this song now available on Youtube. Very recently a video of this song sung by e years old toddler went Viral over social media,I present all the versions here including the original.

Lag Jaa Gale  by Various Artists (Who Sang It Better?)