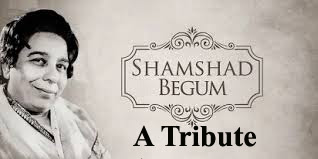 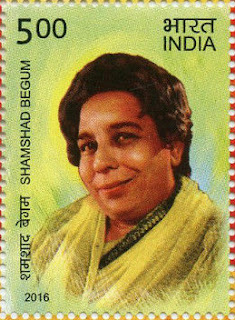 Her unique voice and style of singing set her apart from contemporaries such as Geeta Bai, Amirbai Karnataki, Lata Mangeshkar and Asha Bhosle. She sang some of Hindi cinema's best-loved numbers between the 1940s and 1950s.
She was one of the first playback singers in the Hindi film industry and voice behind hit songs like 'Mere Piya Gaye Rangoon', "Meri jaan...Sunday ke Sunday" 'Kabhi Aar Kabhi Paar ' and 'Kajra Mohabbat Wala '. She captivated the hearts of her listeners with the enchanting depth of her voice.
Shamshad Begum( 14 April 1919 – 23 April 2013 ) was at the peak of her career right from 1941 to 1955 and was the most in-demand female singer and highest-paid female playback singer. It was the composer Ghulam Haider who took her to Bombay in 1944 for singing in the Hindi films. Before this, she sang for Punjabi film Yamla Jatt in 1940. Haider used her voice skilfully in some of his earlier films such as Khazanchi (1941) and Khandan (1942). After partition, Haider moved to Pakistan but Shamshad Beghhum stayed in Bombay. She sang for other music directors like  Naushad Ali, O. P. Nayyar, C Ramchandra and S. D. Burman who were emerging. It was Begum's solo and duet songs sung for Naushad in the late 1940s and early 1950s which made Naushad famous.
In this blog, I am taking some of her hit songs under the music direction of Naushad.
The first song under Naushad was from the 1946 film Shahjehan