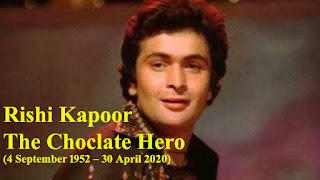 He started his career early, as a child actor in his father’s film Mera Naam Joker (1970), for which he won a Filmfare Award and National Award. His first role as an adult came in the iconic Bobby (1973) opposite Dimple Kapadia.  He became the craze and superstar with that film. Since then he played the romantic lead in 92 films, which include 41 multi starrer films.
Rishi Kapoor in an interview said that "  I was not allowed to show my range. Everybody wrote a romantic hero for me. I tried to break free but the word they used for me was cute. My pet name, Chintu, added to that image. No doubt, I was good at singing songs and romancing young heroines on screen, but that didn’t mean you make me do the same thing for 25 years. Sirf gaane gaata raha. Only the locations changed – from Ooty to Switzerland to Kashmir valley,” Rishi Kapoor had 51 films as the solo lead hero from 1973 to 2000, but 40 of them were box office flops and only 11 managed to hit. These were Bobby, Laila Majnu (1976 film), Rafoo Chakkar , Sargam, Karz, Prem Rog, Nagina, Honeymoon, Chandni, Heena, and Bol Radha Bol.
He was part of hit films such as Amar Akbar Anthony, Laila Majnu, Rafoo Chakkar , Sargam, Karz, Bol Radha Bol and others. In the later stage of his career, he was seen in films such as Kapoor and Sons, D-Day, Mulk, and 102 Not Out.In 1999 he directed the film Aa Ab Laut Chalen, starring Rajesh Khanna, Aishwarya Rai and Akshaye Khanna in the lead roles. His last film as a romantic lead was the delayed Karobaar:  For his performance in Do Dooni Chaar, he won the Filmfare Critics Award for Best Actor in 2011, and for his role in Kapoor & Sons, he won the Filmfare Award for Best Supporting Actor in 2017.
In 2018, Rishi Kapoor was diagnosed with cancer, following which the actor was in New York for more than a year to receive treatment. While he returned to India this year, he had again been hospitalized in New Delhi in early February, while on a visit to New Delhi.
He died on 30 April 2020 from complications with cancer in H.N. Reliance Hospital Mumbai
Song of Bobby 1973