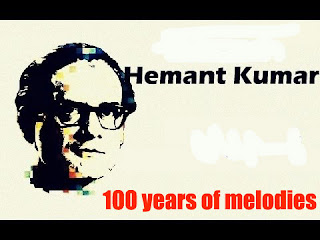 Every distinguished creative artiste is born with one gift, but, Hemantda was born with several gifts. As a singer, he reigned supreme in Calcutta and Bombay. From "Naagin", "Jaal" to "Bees Saal Baad" and the '50s and '60s were decades that 'belonged' prominently to the unique talents of Hemant Kumar.
He started in Bollywood as a singer, turned into a composer, and later a producer and director. His first Hindi film as a composer was the 1952 film "Anand Math".
The music of Anand Math (1952) was a moderate success. Perhaps, the most notable song from this movie is 'Vande Mataram' sung by Lata Mangeshkar, which Hemanta set to a marching tune. Hemanta Kumar gained popularity in Mumbai as a playback singer. His songs play backed for Dev Anand under music director S D Burman in movies like Jaal ("Yeh raat, yeh chandni phir kahan ... "), House No. 44 ("Chup hai dharti, chup hai chand sitare... "), Solva Saal ("Hai apna dil to awara ..... "), Funtoosh ("Teri duniya mein jeene se ... "), and Baat ek raat ki ("Na tum hame jaano ..... "), became very popular.
He became popular as a composer after the release of "Nagin" in 1954 which became a major success owing largely to its music. He received the prestigious Filmfare Best Music Director Award for this film in 1955.. his classic ‘been’ music in the song “Man Dole Mera Tan Dole" is now immortal.

In the late 1950s, Hemanta ventured into movie production under his own banner: Hemanta-Bela productions. The first movie under this banner was a Bengali film directed by Mrinal Sen, titled Neel Akasher Neechey (1959). Latter he made films in Hindi, his production company was renamed Geetanjali productions and it produced several Hindi movies such as Bees Saal Baad, Kohara, Biwi Aur Makaan, Faraar, Rahgir,  and Khamoshi — all of which had music by Hemanta Da. Only Bees Saal Baad and Khamoshi were major commercial successes.1962 was a special year for him, The music of Bees Saal Baad and Saheb Biwi aur Ghulam became very popular. Hemanta Da pulled out all stops for a score that ranks as one of the ten best ever composed for the Hindi cinema. Between them, Geeta Dutt and Asha Bhosle created a universe of pain and romance in Sahib Biwi Aur Ghulam. From Geeta Dutt's 'Na Jao Saiyyan..' to Asha'a 'Bhanwara Bada Naadan Hai..', each song stuns each note cuts deeply in Sahib Biwi Aur Ghulam.
Hemant Kumar was also remained connected with Bangla Films throughout his career, in fact, he was very busy there in the late 60s and 70s. He remained the foremost exponent of Rabindra Sangeet, film and non-film songs. His output continued to be popular for most of the decade. Some of them are Jodi jante chao tumi... (1972), Ek gochha rajanigandha , Aamay prasno kore nil dhrubatara..., Sedin tomay dekhechilam... (1974), Khirki theke singho duar... (Stree, 1971), Ke jane ko ghonta... ( Sonar Khancha, 1974), Jeona daraon bandhu... ( Phuleswari, 1975 ) and popularised Rabindra sangeet using them beautifully in films as per situations. A very popular and classic example is the song Chorono dhorite diyogo amare.. in Dadar Kirti(1980). In 1980, Hemanta had a heart attack that severely affected his vocal capabilities, especially his breath control. After that, he composed music for a handful of Bengali movies and one Bengali and one Hindi tele-series.In 1987, he was nominated for Padmabhushan which he refused politely.
In September 1989 he traveled to Dhaka, Bangladesh to receive the Michael Madhusudan Award, as well as to perform a concert. Immediately after returning from this trip he suffered another heart attack on 26 September and died at 11:15 pm in a nursing home in South Calcutta.
With him, an era ended, but Hemant Kumar can never be forgotten. His music will live on for another 100 years. “Beqaraar Karke Humein Yun Na Jaaiye, Aap Ko Hamari Kasam, Laut Aiye"
Song of Anandmath 1951