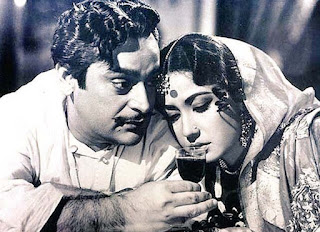 Rehman (23 June 1921- 5 Nov 1984), was an integral part of the Guru Dutt team, and most known for his roles in films such as Pyar ki Jeet, Badi Behen, Pyaasa, Chaudhvin Ka Chand, Sahib Bibi Aur Ghulam, like Guru Dutt he was also signed by Prabhat Studios as 3rd assistant director to Vishram Bedekar during the shooting of Lakharani (1945).
He appeared as one of the heroes with Dev Anand in PL Santoshi’s Hum Ek Hain (1946), The movie was a success and Rehman never had to look back. Initially, he played lead roles, but as time passed, he accepted supporting roles and made his mark in some hit films. He will be remembered as the  Mr.Ghosh, the publisher of Pyaasa; the insensitive Zamindar (Chhote Sarkar) of Sahib Bibi Aur Gulam or Nawab of Chaudvin ka Chaand, and Chinoy Seth of Waqt.
After college (1942), he joined the Royal Indian Air Force and trained at Poona as a pilot. The Air Force didn't appeal to him and soon left for a career in films at Bombay. His first brush with acting happened almost by chance. Director D.D. Kashyap, whom Rehman was assisting at that time, urgently required someone to play the role of a Pathan in his film ‘Chand’ (1944). Since Rehman was the only one on the sets who could tie a turban the Pathani way, he got this role, for this role he had to speak one dialogue, he had to give 50 takes for this dialogue.
The next film was Hum Ek Hain followed by Pyar Ki Jeet(1948) and Badi Behan(1949) as hero opposite Suraiya. Both films were hit but after these films, none of his films as hero clicked. It was Guru Dutt who offered him the character role in Pyasa
Rehman also did key roles in ‘Waqt’, ‘Baharon Ki Manzil’, ‘Gomti ke Kinare’, ‘Dushman’, ‘Holi Ayi Re’. Rehman received four Filmfare nominations as Best Supporting Actor for: Choti Bahen (1958), Chaudhvin Ka Chand (1960), Sahib Bibi Aur Ghulam (1962), Dil Ne Phir Yaad Kiya (1966).
In 1977, he suffered heart attacks after which he got throat cancer and died after a prolonged and painful illness in 1979.
The song in which he appeared with Suraiya in Badi Behan will be remembered forever. “Chup Chup Khade ho, Zaroor koi Baat hai”, will always be in our memories.