Raj Kapoor had a great ear for music 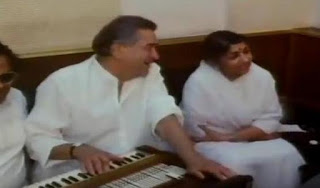 Have you ever thought, why the music of all his films remains immensely popular? The reason being he himself had a great knowledge of music. He learned music in his childhood. In his early days, he wanted to be a music director. He even sang in his earlier films like Dil Ki Rani, Chitchor, Chittor Vijay, Jail Yatra, and Gopinath.
His music journey started with Papaji (Prithviraj Kapoor) in theatre in Calcutta. When he came to Bombay he learned classical music playing Harmonium, Tabla, and Sitar at Narayan Rao Vijay Academy. He was also with Anil Biswas for some time.
He was very fond of composing tunes, he composed tunes with Ram Ganguli with whom Shankar, Jailishan used to play Harmonium and Tabla. It was there the birth of the Team of Shankar Jaikishan and Raj Kapoor took place, that entertained the music lovers.
Lata Mangeshkar in an interview said that a filmmaker has to be a musician himself to understand the quality of music needed in his films. She said that Raj Kapoor had a sharp music sence. Raj saab was a complete musician. He played the tabla, the harmonium, and the piano. He composed songs and sang them in his own voice before handing them over to professional playback singers.
Raj Kapoor's song sittings were very famous, all the stake holders of the song used to be invited on the sittings, time was no limit, every one present cold give his suggestion. He loved to listen to tunes, to prune and trim the compositions, to correct the singers. He also sit with the Lyricist to change a particular line or word which is not matching the tune, he perfected the compositions to suit his taste.
Lata Mangeshkar at a function said that the music of RK Films may have been attributed to Shankar-Jaikishan or Laxmikant Pyarelal in Bobby or Satyam Shivam Sundaram but it had the final finish of Raj Kapoor which used to be icing on the cake.
Raj Kapoor was of the opinion that songs are the important ingredient of Hindi cinema.He beeived that these should carry the story ahead. Like his peers Bimal Roy and Guru Dutt, he gave as much importance to the execution of a song as to a scene.
For him, the songs were truly not only audio but audio-visual. He saw music as it were; and only when he could how the song could be filmed, did he okay its recording. His use of elaborate sets, of light and shade to convey sombreness and technicolour to project joy, were all part of his visual perception.
Songs in RK films were never just 'there'; they were seamlessly woven into the fabric of the film, used intelligently and sensibly to complement the narrative.