Nutan- She Made 'Kalyani' of Bandini an Immortal 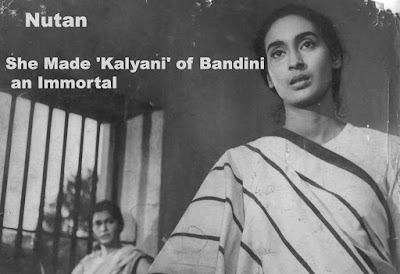 Nutan's portrayal as Kalyani, which is regarded as one of the finest performances in the history of Indian cinema. The film won the Filmfare Award for Best Movie and she received her third Best Actress Award for this film. This film was the last directorial film of Bimal Roy.

Nutan was pregnant with Mohnish Bahl when Bimal Roy (who had worked with her in Sujata) offered her Bandini. She wanted to have a break from the films during that time but this role tempted her to work during pregnancy. She gave an ultimate performance and made Kalyani an immortal. Bandini revolves around Kalyani and was also the only film to have depicted the sacrifice made by ordinary rural women during the Indian independence struggle.

The film begins with Kalyani (Nutan), a thin cotton-sari-clad bandini in jail. She's outwardly subdued but there is passion obviously raging within her.  She volunteers herself to care for a severely ill and contagious TB patient, with evidently little concern for her own life. The acting by Nutan was nuanced in a way that is rare for today barring certain screams, she sticks to an internal rhythm, letting her eyes, her slightly downturned lips, and her listless expression convey all the grief as she goes about her work.

Kalyani, the all suffering, selfless, sacrificing, and strong, yet weak Indian woman. She must make a choice between two very different men, Devendra (Dharmendra), the loving prison doctor, and Bikash (Ashok Kumar), a man from her past.

Surprisingly, Nutan is given no songs in the first half; “O panncchi pyaare and Ab ke baras bhej bhaiyya ko babul” were reserved for the second half.

She was an actress who could change gears with well-oiled efficiency: She was the very essence of featherweight froth in films like Paying Guest and Anadi and made a splash by posing in a swimsuit for Delhi Ka Thug. Nutan also gave cry-from-the-soul performances in Sone Ki Chidiya (as an exploited actress) She acted in Shammi Kapoor extavaganzas like Laat Sahab clad in skirts and pants, sari-clad, self-sacrificing Saraswatichandra mould, secretly wiping away a tear and singing Main toh bhool chali babul ka desh. This hit garba song was one of Nutan's few, full-fledged dance numbers. Nutan continued to get interesting roles even after she crossed 40. She could portray strength of character --- as seen in her award-winning role in Raj Khosla's Main Tulsi Tere Aangan Ki and others like Saajan Bina Suhagan, Saajan Ki Saheli, Teri Maang Sitaron Se Bhar Doon, Rishta Kagaz Ka.

Nutan was diagnosed and treated for breast cancer in 1990.] In February 1991, she was admitted to Breach Candy Hospital in Mumbai after she fell ill. At the time, she was filming Garajna and Insaniyat. She died at 12:07 p.m. (IST) on 21 February.