Raj Khosla- The Man With The Golden Toucn 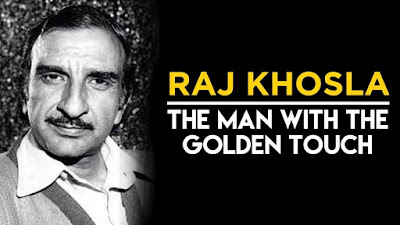 Raj Khosla ( 31 May 1925 – 9 June 1991) came to Bombay to become a singer but he became an ace Director In his autobiography, Romancing With Life, Dev Anand mentions meeting a wannabe singer, Raj Khosla at a coffee joint around Mumbai's Flora Fountain. Dev Anand helped him and gave him a job as an assistant to Guru Dutt for the Navketan film Baazi 1951. He assisted Guru Dutt in his subsequent films. Guru Dutt who was producing CID (1956), had the confidence of Raj Khosla's capabilities and the Golden Touch.

His early background in classical music ensured that most of his films excelled in music. Art of picturizing a song he learned from Guru Dutt. Most of his films would be remembered for their lovely songs. In this blog, I have selected such beautiful songs from his films.