Why Bollywood is Lagging Behind on Films on Environment ?

India is the biggest producer of films in the world but very few films are made on this subject. The Government of India introduced an award for Best Film on Environment Conservation/Preservation in 1989 to encourage films in this genre. The first film awarded on this subject was an Assamese Film 'Bonani'  directed by Jahnu Barua. Since its inception, the award has been present only nineteen times to unique films. It has been presented for films in eight languages with the highest being six in Malayalam, followed by five in Kannada, two each in Assamese and Odia, and one each in Bodo, Manipuri, Marathi, and Tamil.

The first Bollywood film on this subject awarded was 'Irada' in 2017 directed by Aparna Singh starring Naseeruddin Shah. The same year another film . Kadvi Hawa'  starring Sanjay Mishra, Ranvir Shorey and Tillotama Shome was also released on this subject. This film was  also got a Special Mention at the 64th National Film Awards .

It is surprising that Bollywood, the oldest and the largest producer of films in India has not made many films in this subject but many regional filmmakers have made many films on this subject. In southern languages like Kannada and Malayalam, many National Award-winning films are being made every year. Interestingly a Malayalam film 'Valiya Chirakula Pakshikal' 2015 was made on an incident in a small village in Kasaragod in the state of Kerala where thousands of people were infected with fatal diseases due to the effects of endosulfan, a pesticide used to protect cashew nut trees.

Irada (2017) raises the contemporary ecological issues of uranium poisoning, reverse boring, fertilizer poisoning due to the green revolution and their immediate adverse impact on the people who live in Malwa region.

Kadvi Hawa (2017) is the story of a blind, old man (played by Sanjai Mishra), who lives in a Bundelkhand village where it hasn’t rained for 15 years. He lives in the fear of his son, Mukund (essayed by Bhupesh Singh) committing suicide in the face of back-breaking debt.

Kedarnath(2018) was a film based on the actual Kedarnath flood tragedy in the year 2013. This being a commercial film, a Love Angle  added between two inter-faith Lovers. 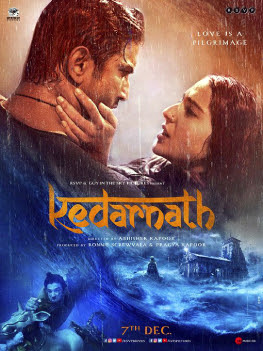 Many Bollywood films had natural calamities in their stories but not outright an environmental story. The floods or droughts were the part of many great films like 'Mother India' or 'Guide' but these do not come in this genre. Bollywood has a massive potential to reach out to the masses and create awareness about the same. It has the power to influence people’s actions and thus make a difference. The films can represent environmental issues and community problems efficiently and convey to the people the aftermath of their current deeds.